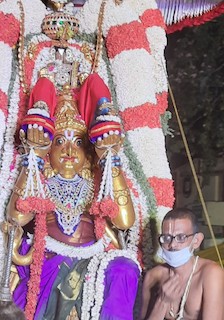 Around this date last month, the Panguni Brahmotsavam was nearing its end at Venkatesa Perumal temple on Mari Chetty Street. While the first half of the utsavam had seen street processions, the restrictions that came into effect on April 10 meant that the second half had to be held inside the temple.

But the closure of the temple for devotees has been a big setback for 51-year old Vasudeva Bhattar. Over the last three weeks, he says it has been a rather lonely life for this sole archaka at this temple

Hailing from Kaattumannar Koil, the historical birthplace of Vaishnavite saint Natha Muni, he has been performing archaka service at this temple for the last two decades. While there is a small fixed salary component, he is largely dependent on ‘Thattu Kaasu’ from devotees for his financial survival.

In the last 20 days, he has been all alone at the temple for three hours in the morning and  three hours in the evening performing Thiru Aaradhanam for Venkatesa Perumal. He also doubles up as the cook in the Madapalli and presents Thaligai to the Lord every day.

Last year, the prolonged lockdown and the restrictions on devotees’ entry into temples for over six months meant that he had to survive without ‘Thattu Kaasu’. Now,  he is reliving this.

He may not say so openly but he will be happy to receive donations from residents of this area.

4 Comments on “This temple priest is in financial distress. You may want to lend a hand.”