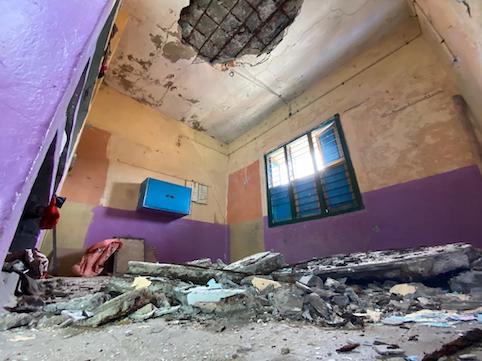 Tragedies are waiting to take place in the seaside colony of Srinivasapuram  – in the decaying, badly-maintained tenement blocks promoted by TN Slum Clearance Board. The top photo shows the state of a tenement here.

This morning, ( on July 27) there was bad news – the roof of one top-most, tiny flat crashed but nobody was injured. ( seen in the photo below)

This is said to be yet another collapse in a series that has been taking place in recent times.

There are over three dozen and more blocks of tenements in Srinivasapuram, occupied by fisherfolk and others. Over the years, they have got into very bad shape – beaten by the coastal weather,  cracking up due to almost nil maintenance.

Families continue to reside in flats that can come crashing down anytime. The Slum Board says all of these residents have been warned in 2018 of the dangers they face. The Board says it has already made plans to demolish these flats, build new blocks and allot them to legally document-holding families.

But the differing voices of residents has put the Board’s plans in the freezer.

There are lots of families who live here in encroached land in huts built between blocks, houses built on the banks of the Adyar Creek and rows of them on the sands.

Board officials have made it clear that new tenements cannot be given to those now living on the seaside.

But to accommodate even the encroachers now living in the colony area, multi-storeyed blocks of 10 / 12 storeys – have to be built but some people oppose extra-tall blocks, claiming power hiccups and failure of lifts will affect daily life.

Mylapore MLA Dha Velu says that he is acting an a mediator in the kuppams where blocks must be redeveloped because the voices of the differing residents and the ideas of Slum Board engineers must be heard out and solutions arrived at quickly. He admits this is a tough balancing ac t.