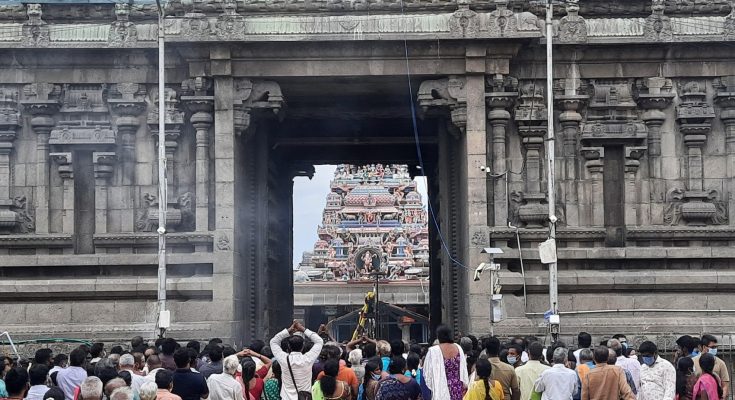 84 year old auditor N. Varadan, who is also a cricket fan having encouraged many young cricketers in the 1980s, believes in the view that one who has a darshan of 120 pradoshams will not have rebirth.

When the lockdown was lifted and temples reopened to devotees, he came all the way from Thiruvallikeni, where he currently resides, to have darshan of the pradosham earlier this month but was saddened when the entrance was shut as the devotees were not allowed to enter the temple during pradosham.

But on Wednesday evening, for pradosham the temple did not allow devotees into the temple.

Varadan, who had been a guest lecturer at the Vivekananda College for many years, said,“I have had darshan of over 70 pradoshams and am devotionally inclined to complete the 120 pradoshams during my lifetime. I hope the Kapali temple authorities permit devotees into the temple at least on the next pradosham.”

On Wednesday evening there was a big crowd present at the eastern rajagopuram. Many of them who had come from afar were disappointed to find that devotees would not be allowed into the temple till after 6pm and they had to make do with a darshan of Sri Kapaleeswarar from outside the entrance.

The temple authorities have now permitted Srikanth and his team members to present Shiva Purana in chorus in front of the Annamalaiyar sannidhi every evening from 8 pm for about half hour.

At Sri Karaneeswarar Temple, even the procession did not take place as the authorities took a call not to have the usual pradosham procession inside the temple.

Shanmugham gurukal told  Mylapore Times on Wednesday that the authorities took this call as a safety precaution as they did not want to attract a big crowd on the pradosham evening.

The temple presented a quiet picture with devotees sitting inside the temple to watch the abhisekam. Many other devotees did pradakshinams around the temple complex on the pradosham evening.