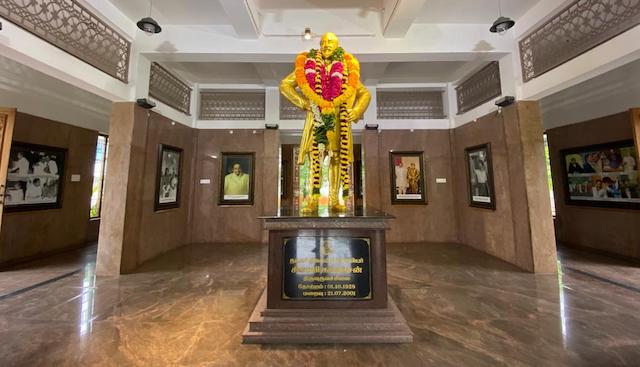 There was hardly any buzz at the Nadigar Thilagam Sivaji Ganesan Manimantapam in R. A. Puram on Wednesday, the day that marked the 20th death anniversary of this celebrated actor.

In the morning, the late actor’s family came by, garlanded the life-size statue of the actor that stands inside this memorial and left. Thereafter, there were a few visitors.

For a versatile actor who was decorated with the Dadasaheb Phalke award, the Padma Bhushan and the Chevalier by France, this state government-managed memorial hardly celebrates the life and career of this film star.

Besides the statue which was first set up at a roundabout off the Marina near Gandhi statue and then moved in here, the walls of this mantapam hold up some 50 framed visuals – mostly of Sivaji Ganesan seen with VIPs or at key public events.  Film stills from some 20 odd films are bunched into a few frames. That is it.

Surely, for passionate film fans and admirers of this actor the mantapam does not do justice to Sivaji Ganesan.

The mantapam and campus is well-maintained and well-lit but its location – at the north edge of the Thiru Vi Ka bridge over the Adyar river – does not easily catch the eye of passersby.

So, the memorial gets a handful of visitors on the weekend, hardly any on weekdays. It is open through the day.

One Comment on “Memorial to Sivaji Ganesan in R. A. Puram has little to offer visitors”