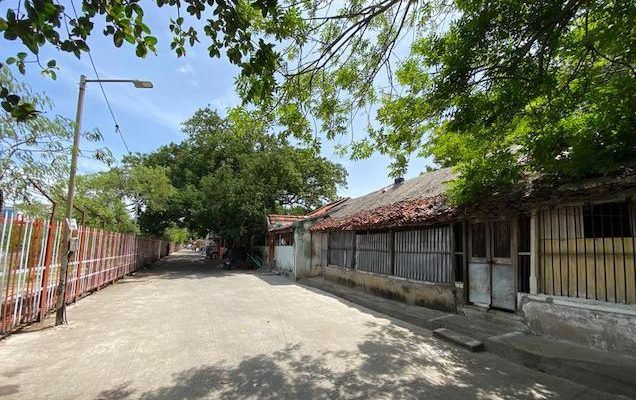 Tamil Nadu’s minister for the department that manages temples has said that plans are on to re-develop the properties that are owned by Sri Kapaleeswarar Temple in Mylapore and are located around it.

Sekar Babu, the minister is quoted as saying that the plan is to provide new accommodation to the temple staff, build a wedding hall and a large, multi-level car parking centre and washrooms and a space for people to connect rituals among other things.

This plan has been confirmed by the Mylapore MLA who accompanied the minister on a recent tour.

The area to be re-developed is a large parcel of land ( about 20 plus grounds) which lies on the south side of the temple. An area bound by Ponnambala Vadyar Street, East Tank Street, the south wall of the temple and the rear of the Mylapore Fund Office.

The news of this re-development plan has got the attention of people who care about the state of civic services in this busy and congested temple zone and the people who value the heritage of this Mylapore temple zone.

One issue raised is – if a large parking lot is built close to the temple, how smooth and easy will the access for vehicles be to this place in an area where all the streets are narrow?

Another issue raised – the tiled houses lining the streets south of the temple, though in a bad shape, lend a heritage and unique facade and feel to this old temple zone.  Clearing them all and raising tall, concrete structures like halls, multi-storeyed blocks and parking lot will end the heritage feel of this place in Chennai.

Architects who have studied the area say there are ways in which re-development can be made while retaining the old.

Some Mylaporeans suggest that the minister and MLA must hold a public meet to debate these issues before going ahead with them since the plans can have a big impact on civic life in a sensitive zone.

One Comment on “Sri Kapali Temple properties around it to be re-developed. But some people question the plans.”