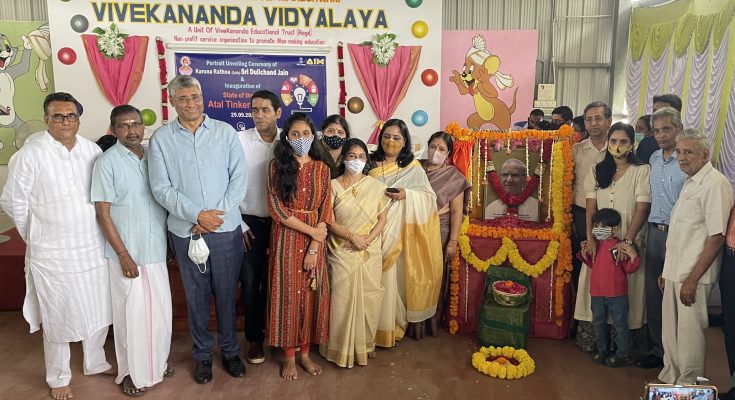 The portrait unveiling ceremony at a school is a great honour as it symbolises the immortal service of noble souls for the upliftment of humanity.

Recently, this honour was bestowed in the memory of late Dulichand Jain, an educationist, author and
social worker who lived in Alwarpet.

Krishna Moolchand Maheswari Vivekananda Vidyalaya located at Nachiar Chatram, Thiruninravur, is one such school started by Dulichand Jain with the kind donation from Moolchand Maheshwari, a philanthropist from Chennai.

As a tribute to Dulichand Jain’s service to the cause of education, a portrait unveiling ceremony took place at the school’s premises on September 29. The day also marked the inauguration of the new state of the art Atal Tinkering Lab at the school premises.

At the event, school principal Sukanya welcomed the gathering. The President of Vivekananda Educational Trust, Meenakshisundaram and secretary, Ravindran presided over the event.

Jain’s brother Amarchandji Pincha unveiled the portrait while the children – Prabodh, Pratibha and Pranav shared their thoughts with the gathering. From Moolchandji Maheshwari’s family, Kapil Maheshwari and
Bina Maheshwari were also present.

He was the visionary and founder of Karuna Clubs which promote humanitarian values to students in over 2000 institutions spread over 12 states of India. He served as President of Karuna International from 1995 to 2011 and Chairman from 2011 to 2020.

During his lifetime, he was honoured with many awards and titles across the country.