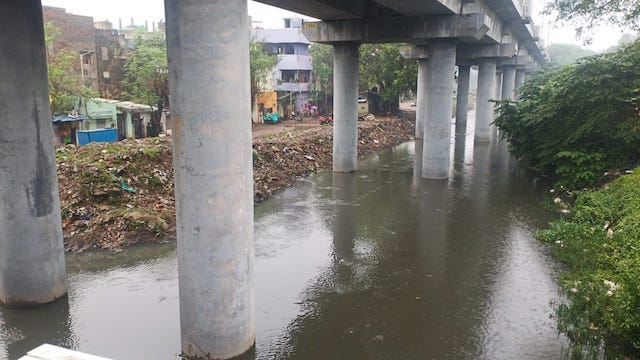 We are on the small bridge on Kamaraj Salai in R. A. Puram which runs above the Buckingham Canal.

The water in the Canal was dredged some weeks ago ( we notice fresh soil and waste piled up close to the banks of the Canal).

But the rainwater since Sunday rains is not really flowing furiously. Nor is the water level high. It appears as if the water is stagnating.

The pillars of the MRTS rail line structure run along the middle of this Canal.

On the other banks, wild vegetation and domestic waste is seen.

Long ago, the huts hugging this Canal on its south side were removed. They almost sank in the waters in the 2015 deluge. This is Govindaswamy Nagar, once a grazing expanse when only a few houses dotted this side of R A Puram.

Though a court order directed that all illegal houses on both banks of the nagar be removed, action was not taken.

Community activists in R. A. Puram have previously said that if drains can empty flood waters into a cleared, deep Canal there will not be flooding in this area.  Flooding did take place in many streets on Sunday.