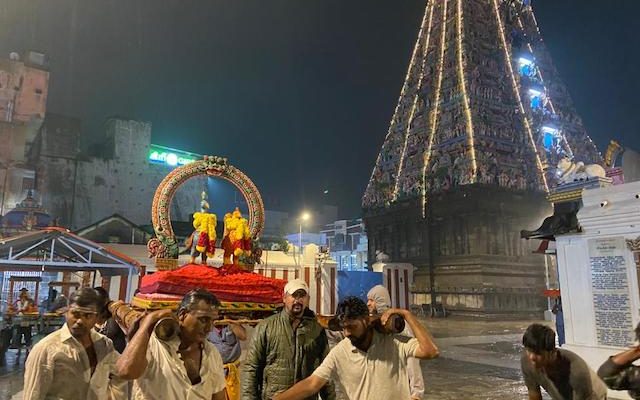 Sri Kapaleeswarar Temple executive officer D Kaveri was almost in tears just after 7pm on Wednesday after watching the performance of the Sripatham service personnel in their enactment of the Soora Samharam episode out in open yard.

In pouring rain, with no rain shield, the Sripatham members were seen in great spirits and presented the Soora Samharam enactment for over half hour in the northern prakara of the temple complex.

If this was not devotion enough, they followed it up with the nnake dance that moved the officer so much that she announced that they should be given a special sambhavanai for this devotional performance in the rain. And she then handed out prasadam and sambhavanai to them soon after their inspiring performance.

Yes, there were people to watch all this. People who are at the temple come rain or harsh sunshine or cyclone.

The Thiru Kalyanam event of the maha Kanda Shasti utsavam will take place tomorrow ( Thursday)  evening at the temple.