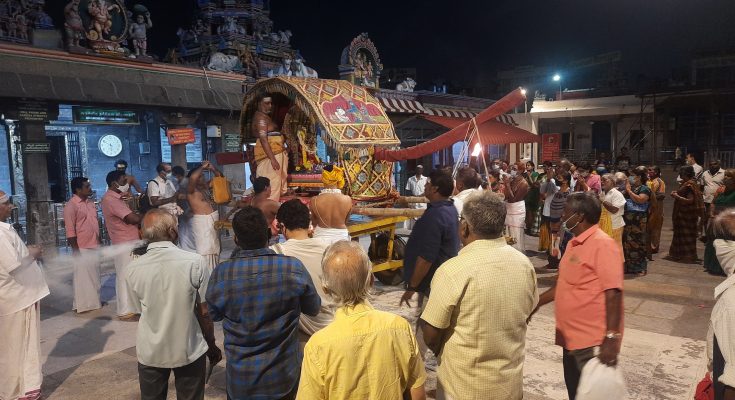 Volunteer Pankaja, who has been performing voluntary service at the Sri Kapaleeswarar Temple for several years and who had cleaned the swami sannidhi till 10 pm the previous night, is among the first at the temple drawing the white pulli kolam at the temple entrance to welcome people for the start of the 30-day margazhi  utsavam.

Since this margazhi has only 29 days, the margazhi celebrations at the Sri Kapali Temple began a day early on Wednesday morning (the last day of Karthigai) as it has been the tradition for the utsavam at this temple to be celebrated over 30 days.

Shortly after, at 4.30am, E Venkatasubramanian Shivachariar made his way to the Karpagambal sannidhi for the palli arai sevai with Sriram presenting Krishna Yajur Vedam and Othuvar Sathugurunathar presenting the saint poet praised verses on Thiru Perunthurai (Avudayar Koil). Sri Patham service personnel too gathered at the Ambal sannidhi for the procession from the palli arai.

People who had already congregated in good numbers for the palli arai sevai, began to stream in bigger number over the next hour.

Abhisekam followed for all the deities over the next 45 minutes.  At the madapalli, the traditional Pongal was steaming hot. Many devotees performed pradaskhinam around the temple complex reciting the  Thiruvembavai verses.

While the deepa aradhanai was being performed for all the deities by Venkatasubramanian Shivachariar, just near the Nandi, Balaji gurukal was devotionally decorating the Saivite saint-poet Manickavachakar ahead of his procession.

This Wednesday morning also marked the beginning of the morning procession of Manickavachakar. A beautifully decorated Manickavachakar went around the temple twice listening to the presentation of the Thiruvembavai verses of Othuvar Sathgurunathar with devotees too softly chanting the verses.

The morning session ended with the presentation of Pongal prasadam to people.