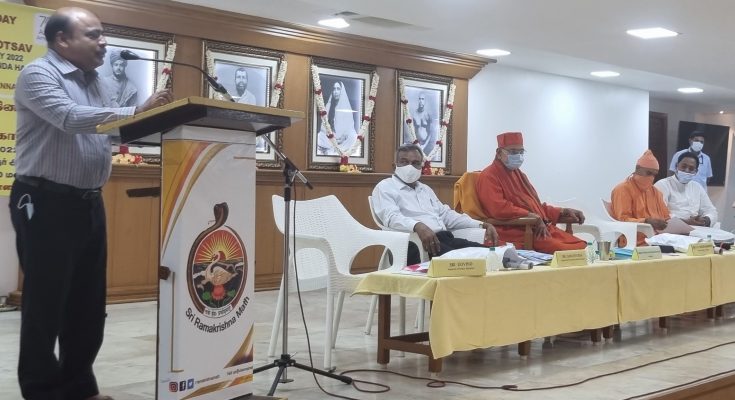 In the year 1985, the Government of India declared that 12th January of every year, the birthday of swami Vivekananda, should be celebrated as National Youth Day. Since then all the centres of Sri Ramakrishna Math and Mission have been celebrating this event.

On January 12, at Sri Ramakrishna Math, Mylapore this  celebration was held on this campus. This year, the event was clubbed with the celebrations of 75th year of Indian Independence.

The Math building and the Vivekanandar Illam were illuminated. Swami Gautamananda, vice-president of Ramakrishna Math and Mission garlanded the Swamiji’s statue at Vivekanandar Illam, offered flowers and performed arati in the morning.

L. S. Sathiyamurthy, district judge, Chennai was the chief guest for this occasion.

There was a session of bhajans by students of Ramakrishna Math Vivekananda Centenary Girls Higher Secondary School, Mint.

Due to the pandemic regulations, participation in the events was regulated. About 100 students from city schools and their teachers participated.