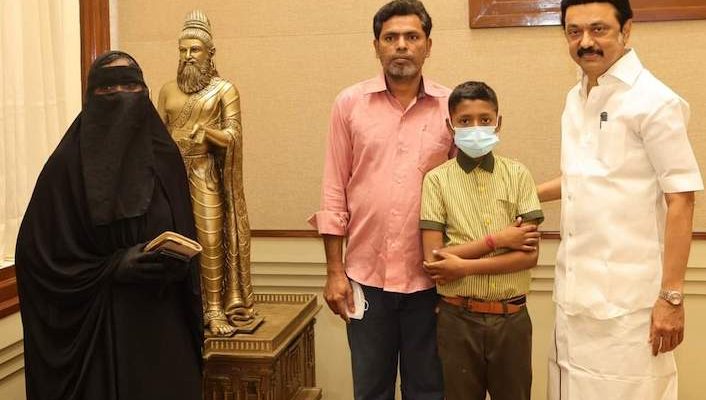 Here is another Abdul Kalam who has been making news, news that reached the table of the state chief minister.

A student of St. Lazarus Middle School in R A Puram, Kalam, questioned by an online media team on the topic of communal harmony made a stirring, extempore statement. And this segment seems to have gone viral.

The video caught the attention of the chief minister’s office and M K Stalin invited the school boy to his office at the Secretariat and presented him some gifts. Kalam was accompanied by his parents.

Kalam’s fame spread. At the 125 years celebration of St Anthonys Girls School held in San Thome on Friday morning, Kalam was invited too and asked by the state minister Anbil Mahesh Poyyamozhi who was the guest here to sit beside him in the VIP row.

Kalam’s teachers say that he has an exceptional skill in talking extempore.

His family had to be relocated to the city suburbs where his father works in a small private shop. His mother is said to be a post grad. Many people responding to pictures of Kalam seen with the chief minister, sought a job for Kalam’s mother.