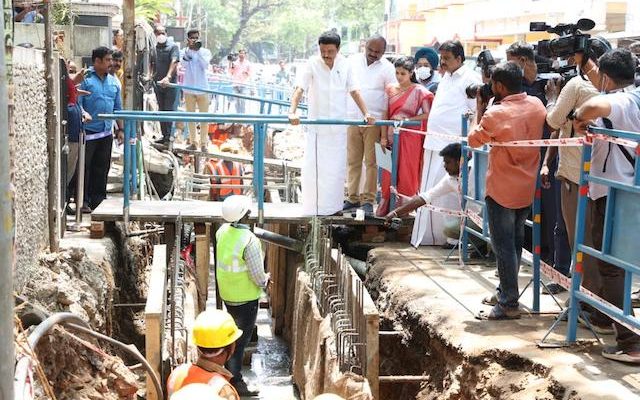 Chief minister M. K. Stalin and city Mayor R. Priya did the rounds of Rama Road zone and of Devanathan Street zone in Mandaveli to get a first-hand look at the current civic works that seek to address  severe problems of flooding and stagnation here.

These are some areas in the Mylapore zone which were badly affected during last year end’s monsoon.

GCC commissioner Gangandeep Singh Bedi and his team of officers and engineers besides Mylapore MLA Dha Velu accompanied the chief minister and the mayor.

Residents in the Mandaveli zone say that currently drains are being fortified on Devanathan Street and GCC plans show that proper drain links that are either weak or are too small in other inner streets in this area will also be made proper.

Residents of Thiruvalluvarpet also renewed their appeal to the GCC commissioner and his team of the need to lay a drain system that has to be built under Devanathan Street that will carry water swiftly from the west side to the east side, and one which drains the rainwater that stagnates in that colony and around.