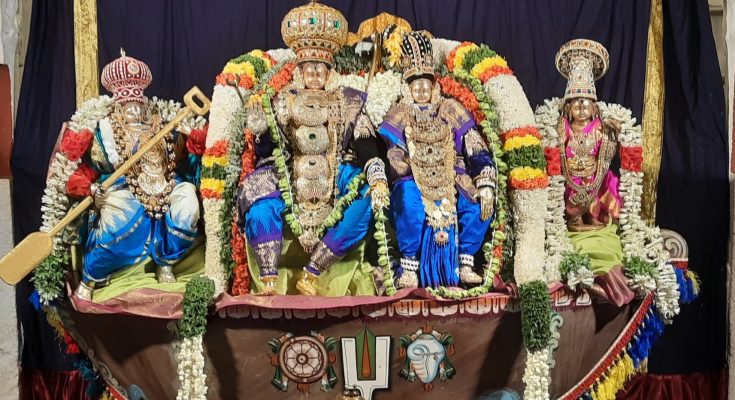 It is not often that a hunter king and a boat specialist is given importance in an utsavam relating to the historical epic. The priests at Sri Madhava Perumal Temple, Mylapore did at the ongoing Rama Navami celebrations.

When Rama was banished to the forest for 14 years by King Dasharatha following the redemption of the two boons he had given earlier to his wife Kaikeyi, it was under the leadership of hunter king Guha that Rama, Sita and Lakshmana went past the Ganges in a big sized boat for a life to be spent in the forest.

Much later, when brother Bharata came to know the background to Rama’s 14 year exile and his departure from Ayodhya, he left the capital city to try and locate Rama in the forest and get him back to the kingdom. Once again it was Guha, an expert boatman, who created a special boat for Bharata to cross the Ganges to meet with Rama in the Chitrakoota forest.

To highlight this episode in the Ramayana, the priests at the Madhava Perumal Temple brought alive this contribution of Guha to both Rama and Bharata on the fifth day of the Rama Navami utsavam here this evening.

Seated on a boat, Kulasekara Azhvaar decorated as Guha was seen ferrying Rama, Sita and Lakshmana.