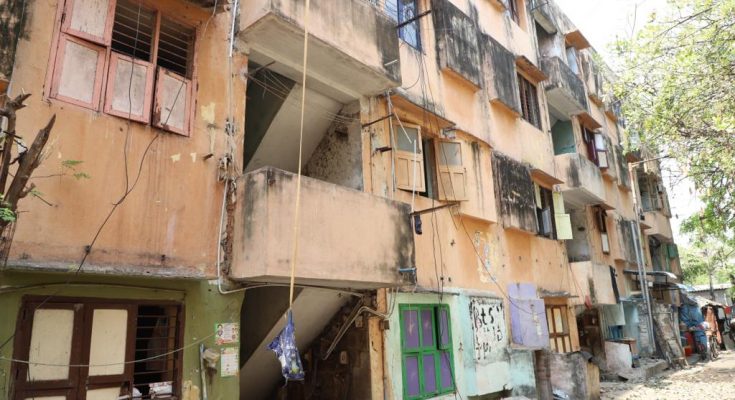 Yet another colony of residences built by the state’s Slum Clearance Board ( now renamed TN Urban Habitat Development Board) will be levelled and a new set of apartments will come up. The colony is Kuyil Thottam, located off San Thome High Road, to the south of San Thome Higher Secondary School.

Recently, state minister T. M. Anbarasan who oversees the Board’s activities formally issued cheques to a few residents; each family which resided here and is moving out gets a one-time rental compensation of Rs.25,000.

Says Mylapore MLA, Dha. Velu, “The previous AIADMK government paid Rs.8000 and following our plea, chief minister M. K. Stalin has recently increased this to Rs.25,000. We got up this function in the colony with the minister present, to assure residents that this money will reach them now and that we are serious about the re-development plan.”

Kuyil Thottam, once a colony of hutments hugging the busy San Thome High Road was developed by the Slum Clearance Board in the late 1970s.

Some 350 families have resided here though over the years, some house-owners sold their apartments and new-comers made several improvements. The state-run Board has been negotiating with the Kuyil Thottam community over the past three years to re-develop this colony and plans fell in place recently. 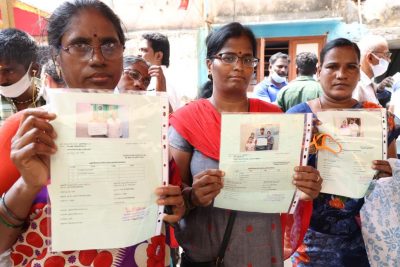 Some 200 families have vacated the apartments and the rest intend to move out soon.

The Mylapore MLA says the Board intends to build apartment blocks which will create about 380 apartments and that allotment is also being made to those who resided on encroached land inside the colony.

He says about 150 families have chosen to accept the rental compensation cheques and that demolition work has begun.

Across Mylapore, many such colonies, first developed by the Slum Clearance Board – are under various stages of re-development.