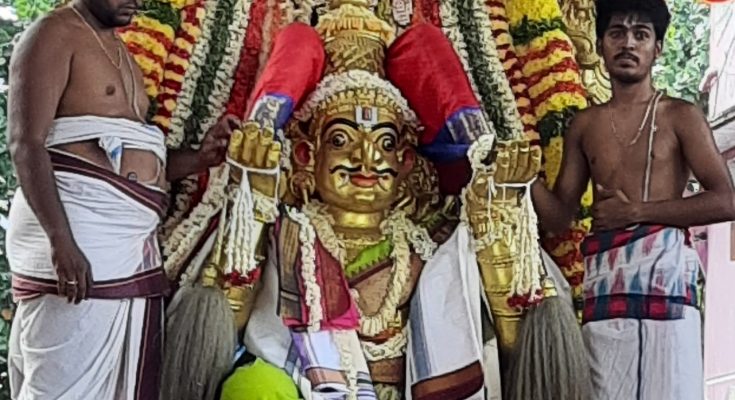 The drum beats, nagaswaram recital and the sacred verses of Pey Azhavaar resounded around Sri Madhava Perumal Temple on the third morning of the ongoing Chitrai Brahmotsavam  on Tuesday (April 26).

It was the big day at the Brahmotsavam with Madhava Perumal providing a three hour Garuda sevai darshan led by Mylapore’s Pey Azhvaar on a Hamsa Vahanam.

Most people present could not take their eyes away from Garuda seen in a bright green silk vastram. Devotees thronged the Mundakanni Amman Koil Street, Nattu Subbarayan Street and Madhava Perumal Sannidhi Street welcoming the Lord on this special morning.

The devotional excitement was palpable among the residents as they were treated to the Garuda sevai darshan for the first time since 2019.  People presented beautiful vastrams, flowers and coconuts to the Lord throughout the procession.