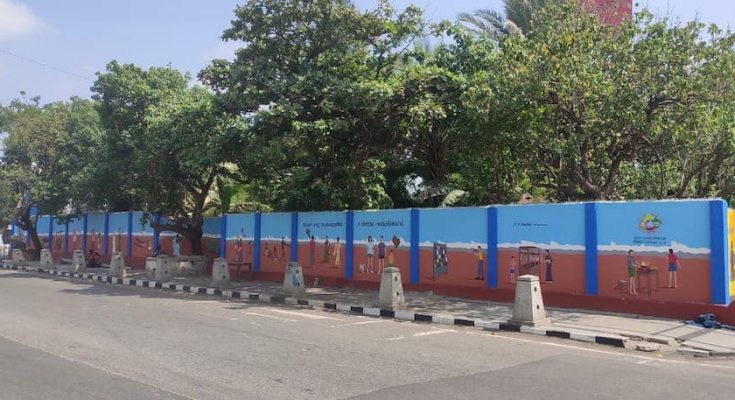 The compound wall of Chennai Light House on the Marina has been turned into a wall of simple, colourful street art. And the art that reflects the people and the life that makes the Marina beach.
This work was a project of a voluntary body called Karam Korpom Foundation (KKF), which promotes the message ‘to stop abusing public spaces’.
Says S. Shivkumar who heads Karam Korpom Foundation, ” Being a prominent road leading to the beach, the theme we used is ‘People on Beach’, depicting different characters who are an integral part of the beach. This has become an instant hit and almost all the people who walk by, pause for a while and enjoy the paintings.”
“More importantly, the local people are thrilled to see themselves on the wall. Some people even came up and requested their picture or trade they are in to be depicted.”

Carried out over a week by a few professionals as well as Karam Korpom artists, this project was carried out under Chennai Corporation’s  ‘Namakku Naame Thittam”.
The project was jointly funded by Zoho Corporation and GCC.
Shivkumar says that the assignment at the Light House ‘has been one of the most satisfying projects of KKF and the appreciation all around encourages us to continue our mission.’
Karam Korpom has been involved in public wall art projects in open spaces, playgrounds, schools run by the civic body and campuses of NGOs. It also undertakes commissioned projects privately.
Contacts –
http://www.karamkorpom.org/.     098840 32182
Photos courtesy: Karam Korpom