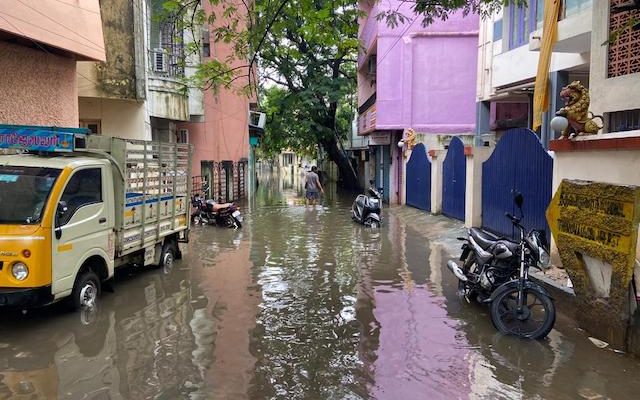 The short spell of rain this week has brought back unhappy experiences for the community of Thiruvalluvarpet, a colony located off Devanathan Street.

As the light rain came down this week, the main street in this colony was flooded and the water did not drain.

This colony was badly affected during the last monsoon, in late 2021, with water stagnating for days, entering some residences and messing up the lives of many people.

The scenes were similar all around this area – St Mary’s Road, Trustpakkam streets, Jeth Nagar and Devanathan Street.

Since that monsoon, the civic body has been on an overdrive to lay new stormwater drains and work is still on in Devanathan Street and off it.

However, civic activists of Thiruvalluvarpet say that the drains being laid now will not address flooding issues of their colony. They say since the streets and roads around the colony are at a higher level than the streets in Thiruvalluvarpet, rainwater gushes into the colony, floods the area and stagnates.

Explains Sailapathi, an engineer and resident who has been keenly pursuing the local issue, “When the chief minister visited Devanathan Street, I explained in detail to the CM that the water stagnating at the  bowl-like formation in our colony cannot drain out in the drains that were being built which are at an elevation. At that interaction, GCC commissioner Gagandeep Singh stayed on  with us to listen to our issues but he said that the new government was just expediting the SWD projects sanctioned during the erstwhile government.”

Sailapathi and a few residents here have been highlighting these key issue for some months now and they fear that GCC engineers are executing plans for the drains that do not take into account the local geography and hence, the flooding will recur every monsoon.

They were pleased when local councillor, Amirda Varshini held a meeting recently to discuss this issue and hope she will be able to get GCC to re-look at their plans and address the flooding problem.