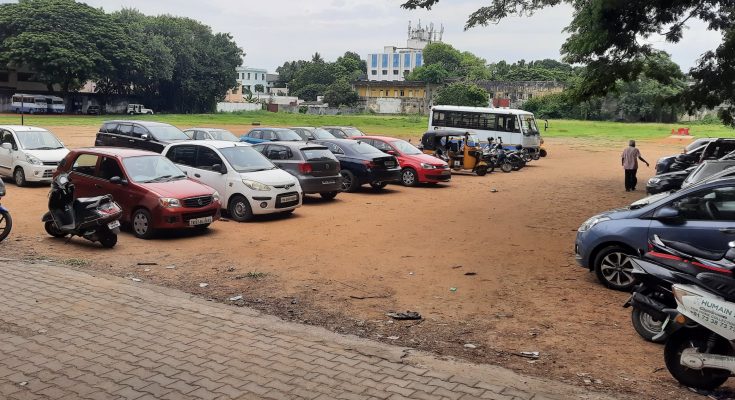 Since the taking over of the P S School playground by Sri Kapaleeswarar Temple which owned it, just under a year ago,
a mega night-long Maha Sivarathri devotional event was held here.
All the talk of developing the playground went into the freezer. Local youths though thwacked the ball in the evenings and amused themselves in parts.
Now, this week, the ground has been provided to Sri Ramakrishna Mutt’s Universal Temple
for use as two wheeler and car parking for visitors at a big event that is taking place at the temple
for a few days.
On Tuesday, a dozens cars and bikes were seen parked inside.
D. Kaveri, executive officer, Sri Kapaleeswarar Temple told Mylapore Times on Tuesday that the Universal Temple
had requested them for parking as several devotees and guests were expected for the event. She clarified that this is being done for a fee.
She also said that one Sir Sivaswamy school had requested the office for parking space here for their own event but did not use it subsequently.
On the play ground being used for cricket like it used to be in earlier decades, Kaveri said that based on requests the ground continues to be provided for cricket matches on a daily basis.
She however said that they would not provide year long contracts of the ground to any single institution thus ruling out TNCA using the ground for all its league matches in the new season that is set to start next month.
Mylapore MLA had said that it would take time to develop this playground.
At the far end of the ground, there is a huge growth of vegetation.
– Report, photo: S. Prabhu