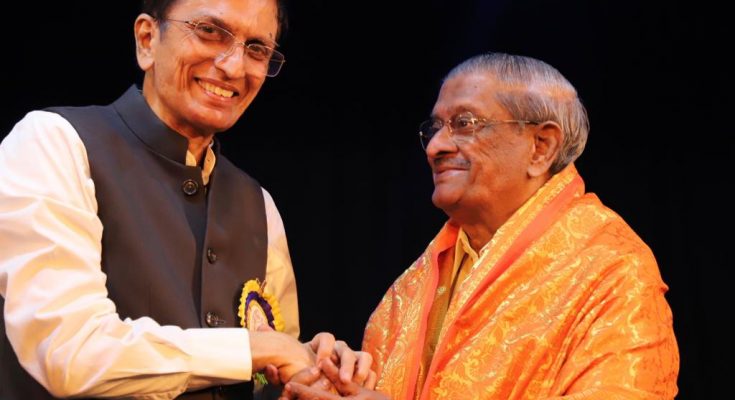 The award was presented by the chief guest S. N. Srikanth, CMD, Hauer-Diana Group. The award carried a purse of Rs.25000,  a memento and a shawl.  K. M. Narasimhan, president, Kartik Fine Arts welcomed the gathering and presided. D. S. Rajagopalan, secretary proposed a vote of thanks.

T. D. Sadasivam was a dealer and distributer for  Philips India. He was also president of Federation of All India Electronics Associations. Throughout his life, he has been a Tamil theatre enthusiast, producing plays to promote talents and later patronising various theatre arts.

Sadasivam has been the  Hony. Secretary of  The Mylapore Academy for the past forty years. He is also the President of Automobile Association of Southern India.

The Academy presents its annual Drama Awards under various categories: this concept initiated by him. TV serials were also included subsequently in the awards.

Sadasivam initiated a choir team titled ‘Simmavani’, headed by late M. B. Srinivasan.  For the past 10 years he has been organising free drama festivals  at Bapalal Bhavan to cater to the needs of theatre lovers of the Thiruvanmiyur-ECR neighbourhood.

As president of Shraddha, the theatre group, he has identified and nurtured the talents of several artistes and produced plays. His wife Prema Sadasivam is a veteran theatre artiste. His son Maheshwar is also a theatre artiste.