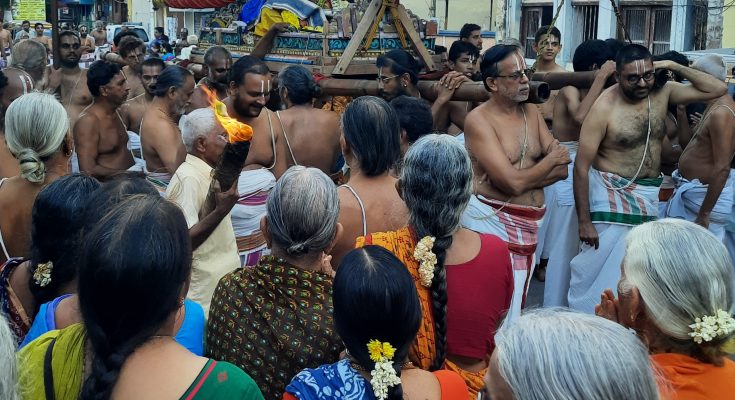 Pey Azhvaar, who sung a verse of praise on the Lord of Thiruvallikeni, left Sri Kesava Perumal Temple at 2.30pm on Wednesday (Sept 21) for a once in a year trip to Thiruvallikeni.

He made a short stopover at 3pm at his avathara sthalam on Arundel Street and then continued on his way to Thiruvallikeni.

Just after 4pm, devotees in large numbers welcomed Pey Azhvaar into Thiruvallikeni at the entrance of the Narasimha Raja gopuram on the western side of the temple. The Prabhandham members presented the third canto of Pey Azhvaar’s verses while the Mylapore saint poet reached the Vahana mandapam.

Over the next hour, Pey Azhvaar visited each of the main sannidhis inside the temple where the sacred verses of Thiru Mangai Azhvaar’s praise on Thiruvallikeni were presented.

Residents dotted the streets with white pulli kolam to welcome Pey Azhvaar into their homes. At 7pm, Parthasarathy Perumal and Pey Azhvaar began the joint procession around the four big Mada Streets providing darshan to the residents of Thiruvallikeni led by the Prabhandham members in the front and the Vedic scholars following behind the Lord.  There were bhajan members as well as part of the procession.

After providing a one and a half hour darshan around the streets of Thiruvallikeni, Pey Azhvaar bid adieu to Parthasarathy Perumal and began his return trip to the Kesava Perumal Temple shortly after 9pm.