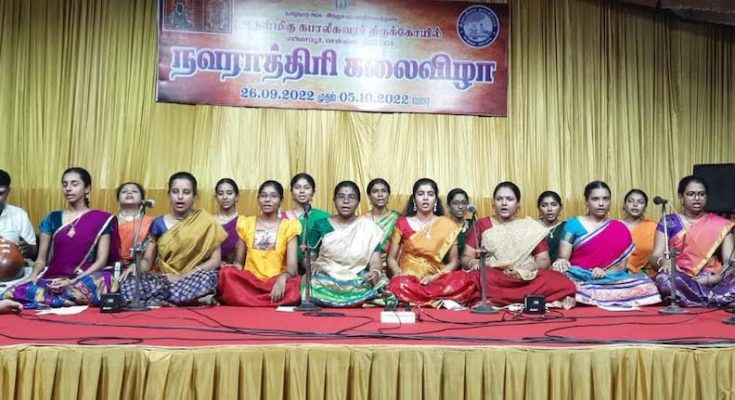 15 students of Shubha Ganesan presented a 90 minute vocal kutcheri on Friday evening as part of the Navaratri concerts series organised at the Sri Kapaleeswarar Temple.

There was a sizeable crowd encouraging the young artistes. Interestingly, Thirunavukarasu, one of the trustees of the temple, stood through the entire programme watching the presentation.

R. Harini has been a long time student of Shubha Ganesan and had presented a solo performance at the ‘mikeless’ kutcheri at the Nageswara Rao Park many years ago. She said she was delighted to have be in this group in front of such a big audience.

V Samyuktha, who is the daughter of ghatam artiste D V Venkatasubramaniam, has been learning under Shubha Ganesan for seven  years and has presented group kutcheris at Thiru Kadaiyur and Thiruvarur temples.

She said this concert after the long pandemic-time break was particularly special for her. “We were performing as a group after two years. All of us were excited to be given this opportunity by our guru and we practiced hard as a team for well over a fortnight.”

The trustee took the students and the guru for a darshan of Kapaleeswarar and Karpagambal at the end of the programme.

Othuvar Sathgurunathan has been involved in identifying and selecting the groups for the kutcheris over the ten days.