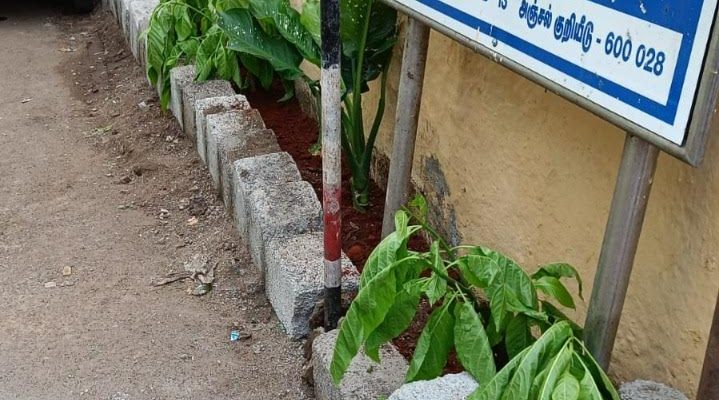 For years, the entrance to Velayutha Raja Street in Mandaveli, from R K Mutt Road has always been a dirty, potholed, narrow street though this is a key access pathway for residents of Raja Street and adjoining areas.
Now, community action has changed the face of this zone.
The entrance to this narrow street used to be partly inaccessible due to two, big garbage bins placed here and and garbage and debris dumped all around them.
The Velayutha Raja Street Residents Welfare Association (RWA) got into the act recently to address this civic issue. The RWA was formed many years ago but remained dormant till recently – now, with the support of its residents – the core team members being G L Hariharen, V. Subramanian, V Krishnan, Sriram, Rajesh and Basha – the group got into action mode.
The activists first went door to door locally, met residents and sought their support to support the door to door garbage collection so that the garbage bins at the entrance, were not needed and could be removed.
They asked GCC and Urbaser local units to remove the bins and organise dedicated door-to-door waste collection.
Neighbouring associations of Raja Street and Poonga View which are part of the FORRA community, lent support as did local area civic officials.
Residents pooled money and planted saplings at the ‘dirt zone’. Others watered these plants.
Now, what was a stinking zone is a clean space that makes the colony a smart one.