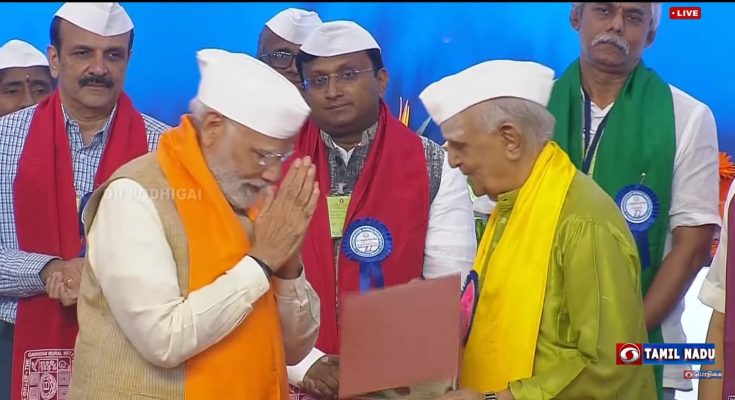 Mridangam vidwan Umayalpuram K. Sivaraman is excited about a recent development in his life –  the award of a honorary doctorate by the Gandhigram Rural Institute based in Dindigul. And a honour that was given to him by prime minister Narendra Modi at an event held on November 11 at the varsity’s campus.

“He had some warm words for me,” says the vidwan from his home on Dr. Ranga Road.

This is the third doctorate that Sivaraman has been honoured with. The first was by University of Kerala and the second by the Tamil Nadu Dr. J. Jayalalitha Music and Fine Arts University based in R. A. Puram, Chennai.

Sivaraman has been awarded the Padma Sri, the Padma Bhushan and Padma Vibhushan, this being the second highest civilian award.

He says, “I have been decorated with three Padma awards and now, the third doctorate by three different universities and this is a rare honour.”

Now, he prepares to perform in yet another December Season. “I have completed 75 years of public performances,” he says.