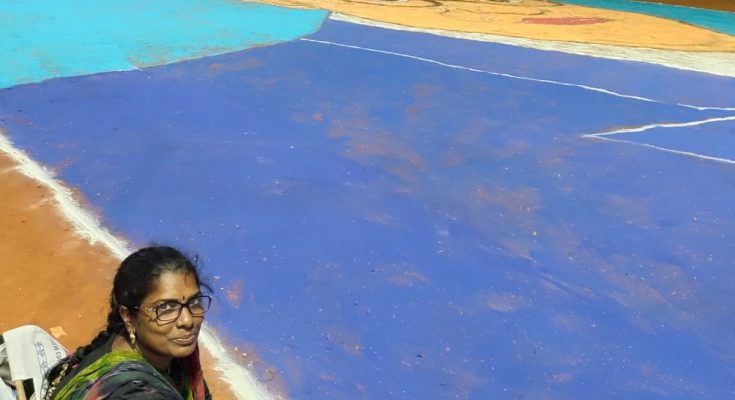 One woman spent over seven hours at the Alphonso GCC playground on South Canal Road in Mandavelipakkam and designed a massive rangoli-based image of Dr. B R Ambedkar on Sunday.

R. Sathiya, a social worker based in Thiruvallikeni ( Triplicane) says she designed this 5000 sq ft image to draw attention to the importance of education in life, reflecting on Ambedkar’s struggling early life and his focus on education.

Sathiya started this rangoli effort after lunch on Sunday and it was past 7 p.m. when she finished, having run out of kolam colour powder earlier and ordered more.

She says about one ton of powder was used to create this image. “I thanked my stars that it didn’t rain,” she said.

She says she got the permission of the GCC local area official for this work and though on a Sunday, the playground is a busy hub for cricket and football, regulars at this ground let her work  by herself though a few grumbled that she had taken over their space.

Sathiya says that her Trust supports youths in education, sport and skills activities and she has previously designed a giant size rangoli themed on India’s tricolour at another ground.

“I chose Alphonso ground because it was clean and flat and designing the image was easy,” she says.