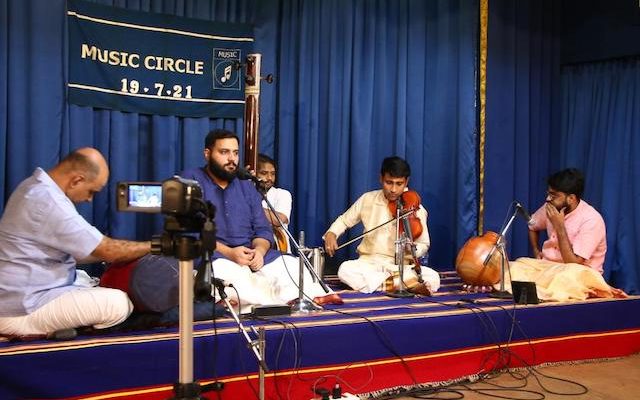 Yet another music festival for December Season 2022 begins, with a launch on December 7 evening, though this one has a character of its own.

The Naada Inbam festival, launched first by its promoter S V Krishnan who built this arts space called Raga Sudha Hall in the verdant shadows of Nageswara Rao Park in Luz, is a kind of warm neighbourhood space.

And its concert plans seek to focus on highlighting the classical essence: so a set of very senior artistes are always featured here. And it follows this pattern for 2022.

Plus, young artistes who have made it to the top are also on stage.

Rasikas thus get a grand buffet of Carnatic music, no frills attached, and for free. The concerts are on for four weeks.

This edition of the Festival starts with the concert of vocalist Gayathri Venkataraghavan with  R. K. Shriramkumar, Melakaveri Balaji and K. V .Gopalakrishnan alongside her.

Many artistes like the set on the first concerts grew up with Ragasudha, performing as the choice youngsters of Naada Inbam’s founder, S.V. Krishnan.

The concert will be webcast live for rasikas on Parivadini Music Youtube channel. The concert video will be removed from the channel in 24 hours. Go to – https://youtu.be/PnNblyOkjUA