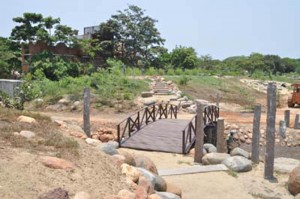 Adyar Poonga, the natural space located off San Thome High Road and Greenways Road which is now being ‘restored’ as part of a state government project will hopefully be open to the public later this year.

The area that is currently being restored is spread over 58 acres. When completed, it will be rich in plant, animal and bird life, the kind that once existed in this area which is an extension of the Adyar river estuary in the Foreshore Estate area.

J.T. Rex Vaz, Education Officer of Adyar Poonga says that the Poonga would be open to the public by the end of December and that it will be partially accessible to people, while the rest of it will serve as a natural habitat for animal life.

The forest area is being created by planting thousands of tropical evergreen trees. As of now ninety thousand saplings have been planted and one lakh more trees will be planted later this year. Artificial water bodies like small ponds have been created and fishes are grown in them.

Rex Vaz says that already a variety of birds visit this area.
This past week we got a first look at the area which is to be open to the public.
Long and winding walking spaces have been created.
The walking area consists of four wooden bridges, several artificially created hillocks, a few huts and bird-watch stops.
Stone sculptures of wild animals have been created in this zone.

In one spot are a variety of masala grinding stones which create an artistic installation on the ground – these were dug up when the entire area was cleared of waste, garbage and muck.

Along the South Canal Bank Road a mangrove forest has been created, as the soil is well suited for its growth. This may not turn out to be a fun and games kind of space for the public.

What the developers have in mind is a space which allows people to appreciate and be aware of the amazing range of plant, animal and bird life in a natural oasis in a metro.

‘Friends of Adyar Poonga’ is an organisation which has started as an initiative to promote environment conservation.
The group has about 42 members and they help in creating environmental awareness in the local schools. the members meet every second Saturday of the month at 10 a.m. inside the Poonga.