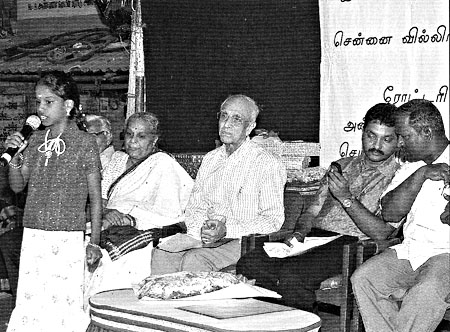 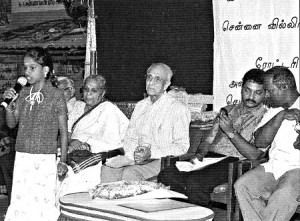 The former Chairman of Goodyear India and Founder Trustee of Chennai Willingdon Corporate Foundation, V. Narayanan passed away in at his home in Alwarpet on September 14 at the age of 91.

The photo shows V. Narayanan (seen in the centre) at a function in Annai Sathya Nagar.

Narayanan was born in a small village near Chidambaram in 1918, began his career in Goodyear India, rose meteorically to become an elected member in the Board of Directors of the company and went on to become the Managing Director and Chairman.

He also assisted other charities, including the Andhra Mahila Sabha as its honorary advisor.

Narayanan received many awards and accolades and among them was the Golden Award presented by Helpage India in 1999.

As the chief executive of Willingdon Hospital, Chennai, Narayanan managed the transition of the hospital’s assets into a charitable institution named the Chennai Willingdon Charitable Foundation.

Using his managerial skills and patience, Narayanan made it into a model of corporate governance in the assessment of donation requests and distribution of funds. He was the catalyst in persuading the affluent to donate and to ensure that these donations were used for the benefit of worthy causes.

To Narayanan his five-year effort to change the Annai Sathya Nagar slum into a liveable colony for 3500 people was what was of great significance in his life.

He was ever vocal in speaking his mind on matters of public good and ever ready to reach out to the less fortunate.