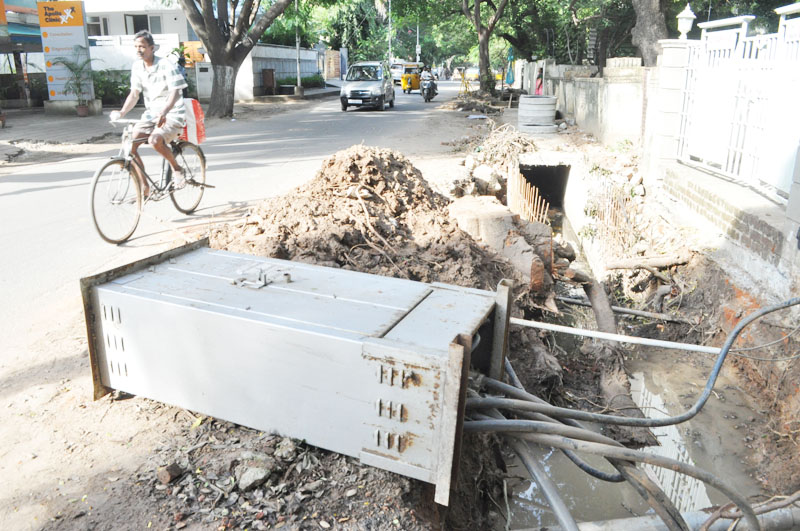 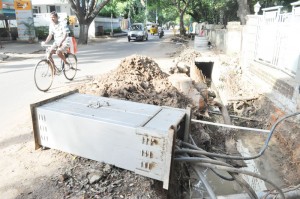 Work on rainwater drainage started in and around Prithvi Avenue a few months back.

Work right at the beginning of Prithvi Avenue (at St. Marys Road end) could not be completed on account of a cotton tree right in front of Apollo Pharmacy and outside the multistoried building “Vaishnavi”.

The approval for cutting the tree (after it became a real security hazard with its roots showing up) came finally and the tree was unceremoniously cut and packed off by corporation contractors on November 25 morning.

In the process of cutting the tree, the TNEB junction box (a huge white one) fell from its seat on the compound wall of Vaishnava into the incomplete ditch. While the cutting contractors went away leaving huge chunks of the cut tree on the main road, the engineers from TNEB were on the spot till late evening. They had finally succeeded in taking out the heavy box with all live cables protruding and some submerged in water.

Unless the drainage work is done (laying concrete etc.) immediately, the junction box with the live cables cannot go back to its place. Till then the TNEB engineers feel the box will “lie” on the main road causing a serious traffic hazard for the public.

More serious was the fear writ on their faces about the possibility of the unwary public coming in contact with the cables. Their AE, Damodaran from Alwarpet TNEB was there promptly to inspect the damage. He of course concluded that nothing much could be done for now (except leaving the junction box) until the storm water drain work was completed.

Will it now attract the immediate attention of the original contractor and enable him to complete the work at least on that limited stretch of Prithvi Avenue?

After all it must be costing the earth to leave such work unfinished for months! And in the meantime who will assure safety to everyone who passes through the ever busy Prithvi Avenue every day?

– Reported by Balubhai, a resident of Prithvi Avenue, Mylapore.