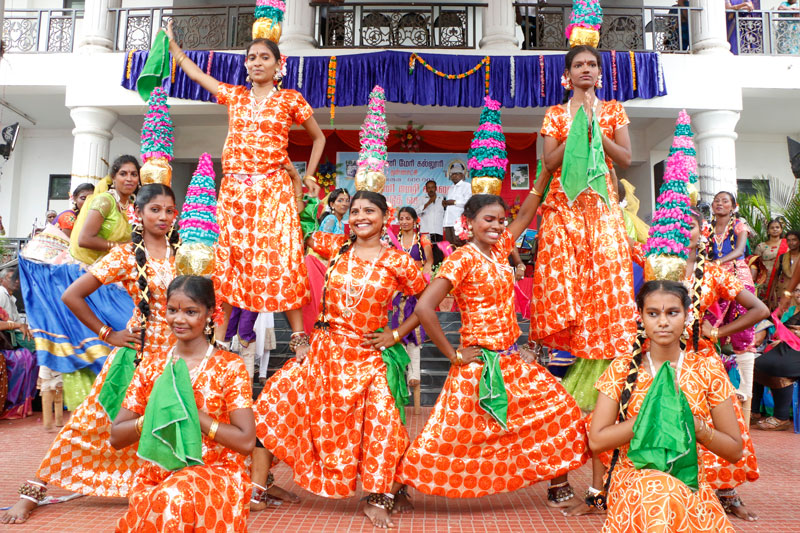 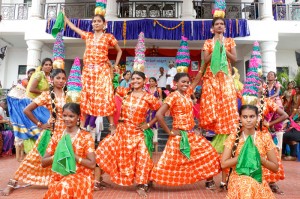 The first event marking the centenary of Queen Mary’s College  was held on July 14. Chief guest P.Palaniappan, state education minister and dignitaries,  HemanthKumar Sinha, Secretary,  Higher Education and M. Devadas, Director, College Education, were received by students and staff with the college band playing.  At the dot of 9 the College Flag was hoisted.

The function started with prayer, followed by the college anthem in Tamil and then in English.

The lighting of 100 lamps was initiated by the chief guest.  The other guests, K. Jagadambal, the oldest alumna, ex-principals of QMC and other elderly alumnae followed in lighting lamps.

Then he delivered the presidential address.  He said that the Government is keen on providing the necessary facilities and infrastructure.

The minister then planted a sapling to mark the beginning of the centenary.  Colourful balloons were let into the sky, they instantly got carried away towards the beach.

The highlight of the programme was the blessings received from the  Chief Minister J.  Jayalalithaa, who on her way to Secretariat,  halted in front of the college for a few minutes, received a bouquet and a written invitation for the centenary celebrations in December this year from the principal.

A decorated cake with ‘QMC 100’ prepared by one of the alumnae was cut and distributed.

The Cultural Programmes started with a scintillating solo violin concert by  Kanyanakumari, the world renowned violin artiste.  This was followed by group singing of popular Carnatic classical songs, like ‘Endaro Mahanubhavulu’, lead by Dr. Premila Guruswamy, HoD, Music Dept., Madras University. All the participants were either alumnae or present staff /students.

Another luminary playback singer Vani Jayaram rendered a few very popular songs of her, singing solo without any orchestra.  The renditions were superb and intimate.

The OSA members present had a great time. More events will be held through the year.

<< Click here to view the photo gallery of this event >>

<< Click here to watch the video of this event >>