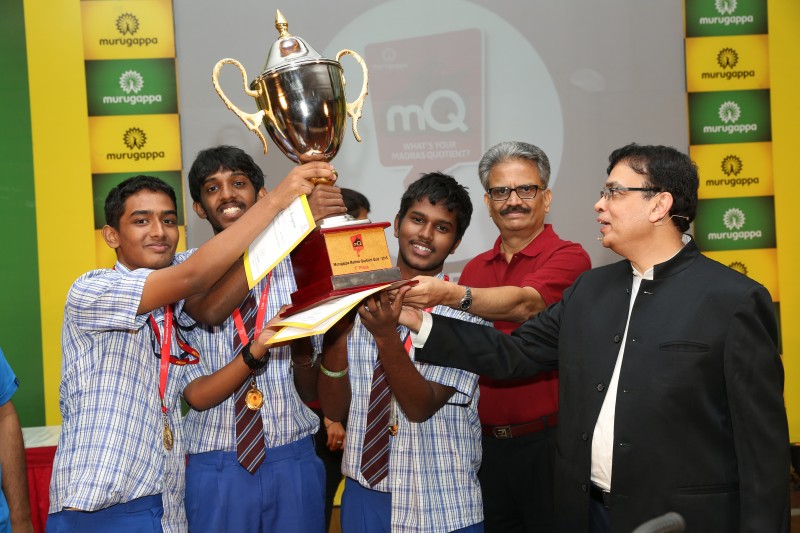 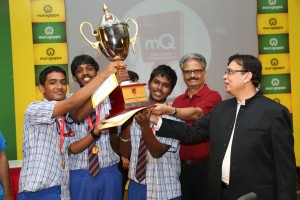 The venue of the 5thedition of the Murugappa Madras Quotient Quiz seemed jam-packed with enthusiastic students, teachers and parents, as 960 students registered to participate in this inter-school quiz contest which was held on Aug 22 at St. Bede’s Auditorium, San Thome.

At the end of the one-and-a-half-hour grand finale, the team from Chettinad Vidyashram (Ashwin Senthil Kumar, Siddharth Pillai and Sethu Aswin) emerged champions. The team from AMM Matriculation HSS (Shubhankar Agrawal, Sarvesh and Saikrishna) were the runners up.

A total of 320 teams across Chennai participated in the written preliminary round, from which six teams were shortlisted for the grand finale. Several members of the audience also won prizes for the various questions asked by the quizmaster – Dr. Navin Jayakumar. The prizes were distributed by Ramkumar, managing director, Tube Investments of India, a part of Murugappa Group.

Organised by the Murugappa Group as part of its contribution to the Madras Week celebrations, the 2015 edition of the Murugappa Madras Quotient Quiz is the fifth edition in running. It was conducted for the first time in 2011 with 96 teams, and steadily grew to 282 teams in 2014. This edition had innovative rounds like ‘Pictionary’ and ‘Grid connect’ in addition to the usual rounds of quizzing.

The programme was attended, among others, by the famed Chronicler of Madras – S. Muthiah,  teachers, parents, quizzing enthusiasts and members of the media.