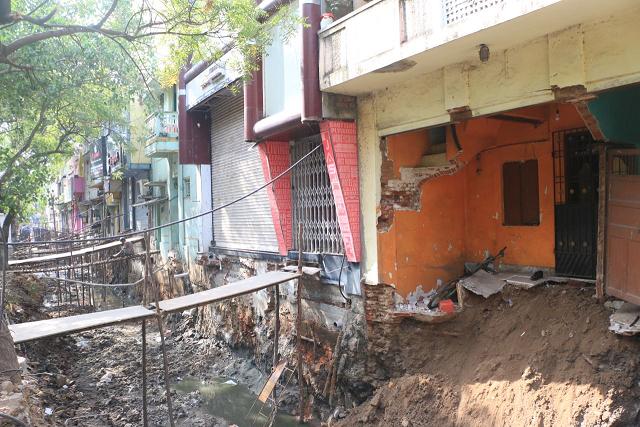 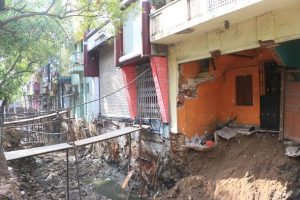 When the residents of P. S. Sivaswami Salai went to sleep on Monday, May 7 night, little did they expect that they would wake up to the news of houses collapsing in their neighbourhood.

A. Sai, a tenant in one of the two homes that collapsed, has been there for almost 20 years. He says, “A little after 6 a.m. on Tuesday morning, the bottom part of the back portion of our house, which has the septic tank and sewage pipes collapsed. The sewage water has now entered our home. Since there is a possiblility of water contamination we have been buying water and food from outside. We hope the problem gets resolved soon”.

The damage to his neighbour’s house is more severe, he says. “A portion of their stairs has
collapsed too”.

The reason he says, is the ongoing storm water drain work undertaken by the Chennai Corporation.

R. Neelakandan, secretary, Vivekanandapuram Residential Welfare Association says, “The work started about a month and a half ago and they have covered a length of about 150 m and have dug upto a depth of more than 10 feet. Before digging, they should have secured the foundation with concrete. Since they did not do that, the houses collapsed”.

He adds, “We are hoping the Corporation finishes the work soon as this is an arterial road and heavy vehicles ply on this road at all times. The vibration from that movement too can cause other houses to collapse. Many of the houses here are more than 50 years old”.