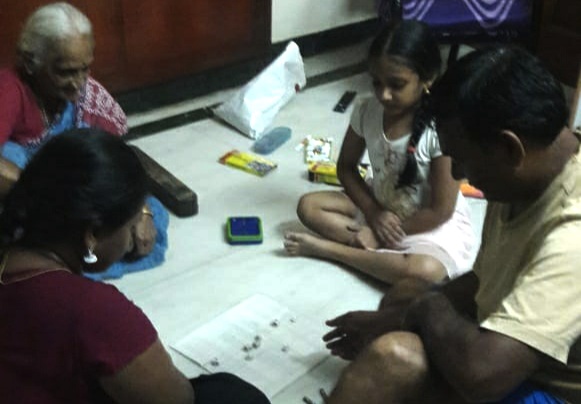 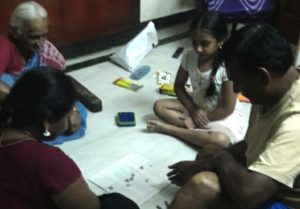 Alamelumangapuram resident R. Rajesh Kannan, a Top 80 professional umpire in the rolls of BCCI (Board of Control for Cricket in India) who played for IOB in the TNCA first division league for 20 years has just returned to the city after five months of umpiring matches across the country.
He is now spending the locked up time at home by getting back to playing traditional games with his two
daughters, games that he once played in his childhood. Rajesh has spent most of the last three decades on
the cricket field playing and umpiring matches.
Says Rajesh Kannan “The current scenario of being locked up indoors has evoked memories of the traditional games that I once played as a young school boy in the 1970s. This is a very different experience from the one I have had as a cricketer and umpire being out in the hot sun. It is also exciting to educate our children on how these traditional games also help improve the math and calculation abilities in them”
Last weekend, he spent several hours playing Dayakattam, Paramapatham and Pallankuzhi at home
with his 77-year-old mother and with his wife and two daughters.
His mother R. Durga is spending her time teaching her two grand daughters and providing insights into Pallankuzhi.
The long hours at home are also drawing young children into traditional arts. Rajesh Kannan’s 7 year old daughter, Haasini, a class two student of P. S. Sr. Sec School has also been spending time trying out her hand in drawing and pencil sketching.
Rajesh Kannan is a resident of Alamelumangapuram, his residence is behind the Sri Anjaneya Temple.