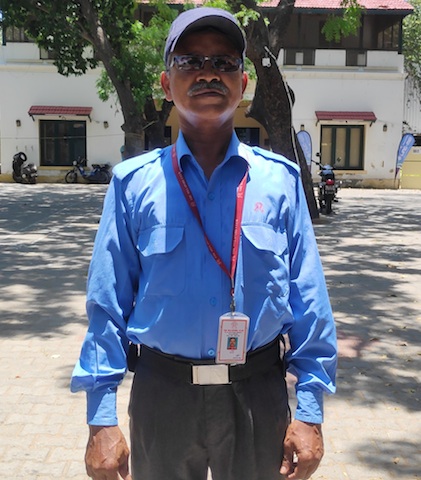 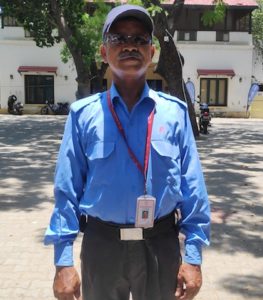 It has been exactly a month since the shutting down of The Mylapore Club following a direction from the state government. The notice of the lockdown from March 17 still hangs on the front gate of the club.

Through the entire period of the lockdown, 53 year old J. Ravi who is the Security-incharge has been at the club for some 12  hours each day.

While under normal circumstances, his function entails providing security services at the club, during the period of the lockdown he has performing extraordinary services much beyond the call of duty.

With none of the staff allowed inside the club, Ravi has been doubling up as the sweeper and the gardener. Each day he and his assistant Ranjit spend 2 hours sweeping the Club complex and watering the plants.

The droppings from the trees are so heavy this season that he has filled up waste amounting to 15 bins. With summer heat picking up, he now brings two shirts each day as he finds himself completely drenched after the extensive sweeping and gardening work.

He says that taking care of the garden has been quite a strenuous job but also serves as a good exercise.  As a daily routine, he also operates the generator at the club to ensure that it remains in condition.

Ravi is also a animal lover. For many years now, Ravi has been also been feeding the street dogs on the Luz Church Road near The Mylapore Club. With most road side eateries remaining closed, the dogs numbering 10 have looked up to Ravi to feed them every day.

He brings with him every morning large number of biscuit packets to feed these dogs. He says that during the period of the lockdown squirrels and birds have become permanent visitors to the Club. He also feeds a few of them.