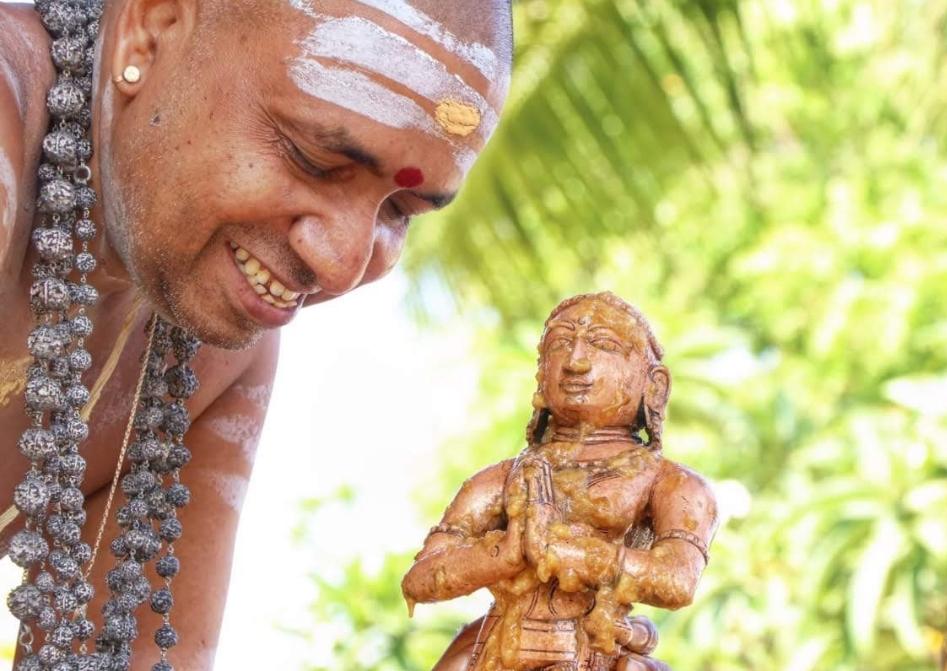 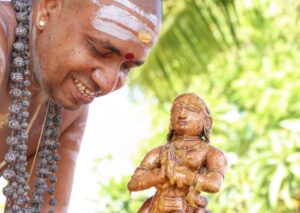 Like it has been for all of us, it has been a very different life for the head priest of Sri Kapaleeswarar Temple, Mylapore, E. Venkatsubramaniam Shivachariar (popularly referred to as Jayakanthan Shivachariar).

He belongs to the 7th generation of priests to perform service to lord Kapaleeswarar and Karpagambal. ( seen in first photo)

In a rare conversation, he opens up to this writer and recounts the rituals at Sri Kapali Temple over the last four months during the period of the lockdown and how the priests have found an inner peace performing pooja without the ring of smartphones and external distractions.

Yes, financially it has been a challenge for priests in all temples without the ‘thattu kaasu’ but this priest says it is all about devotional commitment to the Lord and not about money.

In Panguni, following the cancellation of the Brahmotsavam he, like many others had hoped that the lockdown would be short-lived as the temple was to be closed only till March 31. However as time went by, he came to terms with the fact that the lockdown in temples for devotees was going to be much longer.

He says that the flower garlands for each of the deities in the temple including the sub temples have been organised by the HR&CE and the garlands arrive at the temple early morning. Milk for the abhisekam and oil to light the lamps in each of the sannidhis is available in sufficient quantities.

He delightfully looks back at the way the poojas have been performed these four months with active devotional participation from Othuvars, Vedic vathyars and the nagaswaram artiste during the six Kaala pooja at the temple.

“The poojas these four months have gone on in exactly the same way as it was prior to the lock-down including the night abhisekam at 9pm followed by the inner procession on the pallakku, except that the devotees are not there now and the processions have been missing.”

Chitrai, Vaikasi and Aani are months of annual festivals for three of the four famous Saivite saint- poets. On the sadhayam day in Chitrai, an abhisekam was performed for Thirunavukarasar (Appar) and he was decorated in a grand way. The episode of Appar attaining Mukthi too was performed with the Othuvars presenting ten sacred verses relating to mukthi.

In Vaikasi, on each of the ten days of the utsavam to celebrate Thiru Gnana Sambandar, a specific episode from his devotional life was re enacted including those from his eventful childhood days culminating in Thiru Kalyanam, and mukthi on the moolam day. 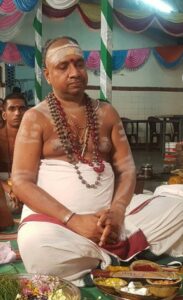 Earlier this month in Aani, on the Magam day, Manikavachakar Utsavam was celebrated with abhisekam and special alankaram for this saint-ooet from Thiruvathavur.

He says that Thiru Kalyanam, which was webcast live, came on the back of requests from devotees. The alankaram was just as grand as during the normal days with the deities decked with glittering jewellery. Oonjal sevai was part of the Kalyana Utsavam culminating with the recital by Othuvar of 10 songs of Manikavachakar.

With the extension of the lockdown, the pradhosham too has been webcast live for devotees to watch from their homes.

Earlier this month (Aani), a three day Pavitrotsavam was performed. In early June, a ‘Vyaathi Sakata Homam’ was performed inside the temple invoking the blessings of the Lord for relief from the Virus. And then during the second fortnight in June, a Pancha Kaavya Pooja was done each day for 1 ½ hours with Homam, Abhisekam and Nivedhanam. Santhi Mantras was recited for relief from big diseases.

On the Visakam day every month, the priests have been performing an abhisekam for Arumugan Swamy.

Jayakanthan Shivachariar ( seen in the second photo here) says that the absence of the devotees is saddening as they are all longing to have darshan and that all the priests have been invoking the blessings of the Lord to reopen the temple for devotees. He says that the other big missing factor is the procession around the streets.

He adds, “Performing pooja has been a very fulfilling experience over the last four months. Being with God in an Ekantham state without many people around is an experience I have not had earlier. I have also been able to quietly do japam after performing the morning pooja at the temple, something I have not been able to do for the last 20 years.”

Jayankanthan Shivachariar takes care of the pooja for 15 days in a month while K Balaji Shivachariar and S Kapali Vaidhyanathan Gurukal do the pooja during the other fortnight in the month.

7 Comments on “Rituals, prayers and special poojas inside Sri Kapaleeswarar Temple: its head priest talks about all this in a rare conversation”