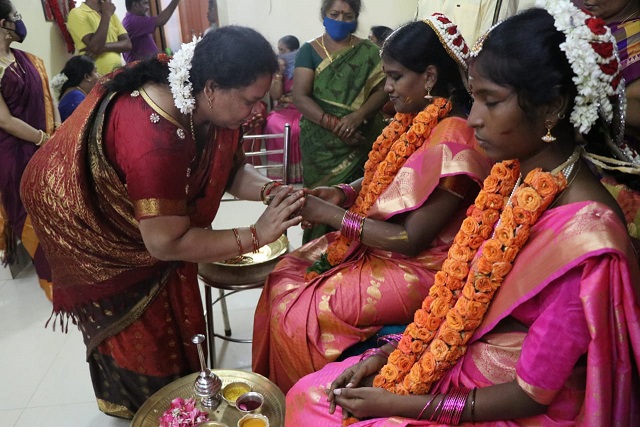 Fridays and Sundays during the month of Aadi are always packed days for Ananthavalli K., a resident of Pitchupillai Street, Mylapore.

For the past ten years, she has been going to Sri Angalaparameshwari Temple at Putlur with offerings of flowers, rice, sarees and jadai to perform a valaikaapu (a bangles ceremony held for pregnant women) for the goddess there.

She says she has been doing this for two decades now.  It is a Aadi must for this family.

On Aadi Pournami every year, she would make koozhu at the Sri Karumariamman Temple at Luz in the morning after which the goddess would be brought in a procession to her house.

A big pandal, decorated with plantain trees and mango leaves erected at the gate and big kolams drawn on the front yard space – all this to welcome the deity.

An abhishekam would then be performed for the utsava moorthy of the goddess at her home after which the deity would be decorated with garlands and ornaments. Nadaswaram and tavil artistes would then accompany the goddess back to the temple.

This year, with the temples closed for the pandemic regulation, Ananthavalli has been doing poojas at home every Friday. On the first Aadi velli (July 17), women chanted hymns from the Lalitha Sahasranamam. On the second Friday(July 24), she performed a different kind of pooja.

She says, “We asked two pregnant women to be our guests. We gave them sarees and bangles and then decorated their hair with flowers and a jadai. We then performed a small pooja for the deity and offered a naivedyam of seven different varieties of rice like sweet pongal, lemon rice and sambar rice.”

A few relatives from the young women’s family were also invited. Later, all of them were served lunch and a thamboolam (with vettla pakku, coconut, fruits, flowers and turmeric) was given to them.