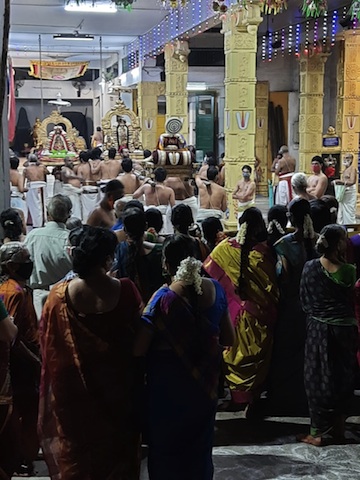 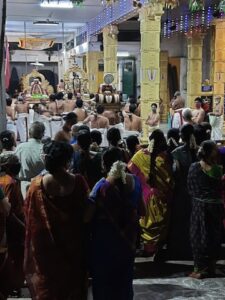 As part of the final day celebrations of the 10 day Vedantha Desikar Utsavam that culminated on the Vadakalai Acharya’s birthday on Puratasi Shravanam (Sept 27),  Pathi Ulathal of Srinivasa Perumal, Alarmel Mangai Thayar and Vedantha Desikar took place inside the temple complex on Sunday evening just after 7pm.

This was followed by Voyali (special walking steps) of Vedantha Desikar inside the temple. The devotees watched these processions from near the entrance to the temple.

During the 10-day festival, the 4000 sacred verses of the saint-poets and all the verses of Vedantha Desikar are recited by the Prabhandham scholars.

In line with the SOP laid down by the Government, the temple authorities had earlier decided not to allow devotees at the sacred verses recital. However, on the final evening, all the devotees, who were standing outside the entrance, were allowed into the temple to listen to the Thirumozhi Saturmurai on Sunday evening just prior to the Pathi Ulathal.

It was crowded inside the temple as people kept listening to the final verses of Saint Poet Thiru Mangai Azhvaar.

While HR & CE Dept. managed temples such as Sri Parthasarathy and Sri Kapaleeswarar temples now follow strict protocols, private temples such as this one take their own call.

In this case, to allow a large number of devotees inside the temple and all standing next to each other to listen to the sacred recital seemed to clearly violate the pandemic protocols.