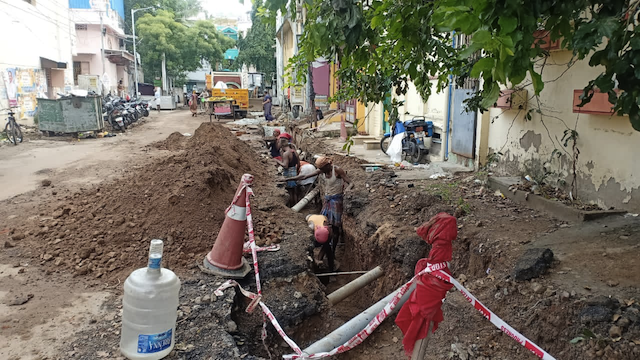 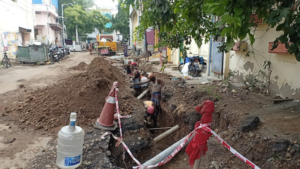 This civic project may have come late in the day but it will serve a key purpose in the heart of Mylapore – tapping rainwater in public spaces.

Chennai Corporation is executing this project in many areas around the two temple tanks in the heart of Mylapore just now.

Work is going on on Mosque Street, to construct what is called a storm water infiltration drain to let rainwater sink into the channel on this street and be led to the Chitrakulam, which is closeby.

Another team of workers is busy on R K Mutt Road, focussed on constructing a drain beneath the pavement section alongside the property of Sri Ramakrushna Mutt – but people wondered at the waste of public money in this case after a proper pavement was laid here not so long ago.

Yet another section of the streetside that is being excavated and a drain planned is on Venkatesa Agraharam Street, the street leading from the Saibaba Temple side to the tank of Sri Kapali Temple.

Already, two streets – New Street and Abraham Street – were dug up to lay pipes that will lead to the Chitrakulam, carrying rainwater. This work is still be to be completed, with pipes and raw earth lying on the sides of the narrow streets.

Earlier, the street that runs alongside the east side of the tank of Sri Kapali Temple was relaid and pipelines and chambers built to channel rainwater falling here to run into the tank – in the past few weeks when it has rained steadily, a steady volume of water has been running into the tank here.