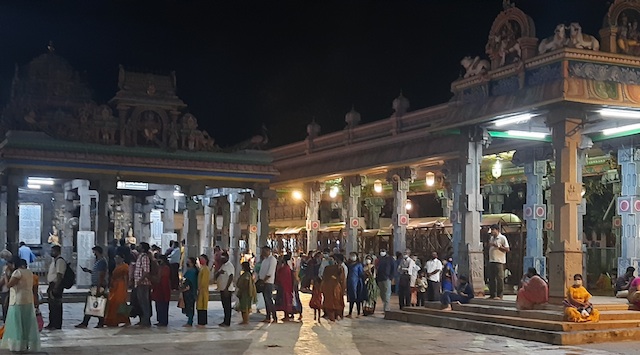 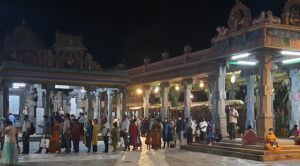 On the fourth Monday of Karthigai (Dec 7),   Sri Kapaleeswarar Temple in Mylapore witnessed the biggest crowd after the lockdown restrictions were lifted and devotees allowed back into temples in the first week of September.

People gathered in large numbers in the morning to witness the shanka abhisekam. In the evening, the long-winding queue of people extended to almost the eastern raja gopuram with a constant flow of people till 8pm.

Over the last three months, Kapaleeswarar Temple has seen only a limited number of devotees – senior citizens have been staying away amidst the Covid scare.

Monday was a different story altogether with devotees from across the city visiting the temple for a darshan of Kapaleeswarar and Karpagambal.

Traditionally, Monday is a special day at Saivite temples and the five Mondays in Karthigai are considered even more special at Sri Kapaleeswarar Temple.

What is the speciality about Karthigai Mondays?

Lord Shiva is known to like abhisekams. There are many different dravyams with which an abhisekam is done.

Kapali Vaidyanathan gurukal, whose forefathers have been performing pooja at this temple for several generations, says that the Agamas provide a specific benefit for abhisekam performed with each of these dravyams.

“An abhisekam with conch shell is believed to provide the devotees goodness and purity (“Su Punya Shanka Pooja Cha” ) and they are said to be liberated from their sins if they witness this special abhisekam on a Karthigai Monday,” the gurukal explains.

The ambal undertook a Monday fasting and this is believed to have resulted in the birth of Vinayaka. The gurukal says that many women fast on the five Mondays of Karthigai and visit the Kapaleeswarar Temple to witness the shanka abhisekam invoking the blessings of the Lord and ambal.

Out of the five Mondays in Karthigai,  the 108 conch shell abhisekam is performed on the first four, while on the fifth Monday, 1008 shanka abhisekam is done.

Kapali Vaidyanathan gurukal says that his father had told him that his forefathers had been performing this shanka abhisekam on Karthigai Mondays at the Kapaleeswarar Temple and that this practice at the temple is over one hundred years old.

The 1008 conch shell abhisekam will take place next Monday morning ( Dec 14) at this temple.