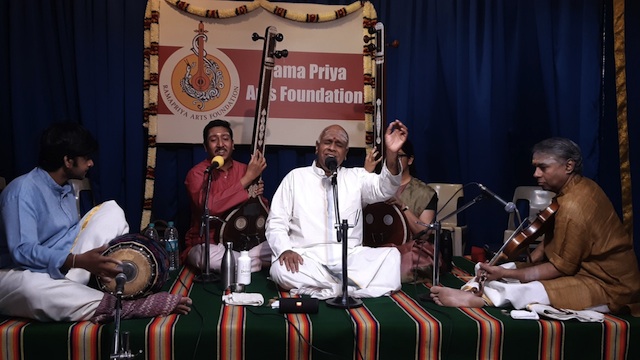 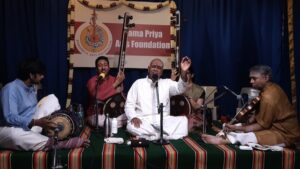 Live classical music and dance concerts are slowly but surely pepping up the cultural scene in Mylapore which shut down fast early last year.

Bhavans hosted its annual Thyagaraja aradhana, though on a small scale on Feb.2.

Raga Sudha hall has been abuzz with a few concerts, with rasikas given the option of watching concerts online.

One of the music concerts held recently, with vocalist Vijay Siva on stage was almost full-house at this venue ( first photo).

Varalakshmi Anandkumar and Durgga Venkatesh, the trustees of the Ramapriya Arts Foundation who hosted Vijay Siva’s concert decided to host an ‘offline’  concert because “there was a yearning among rasikas to listen to a concert live.”

Of course, all SOPs mandated by the state were followed. Names of guests were registered too. 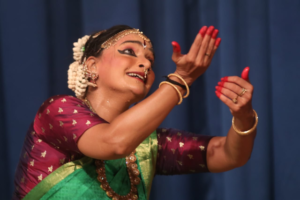 And on Friday, Feb.5 evening Bharatanatyam dancer Jayanthi Srivatsan performed at Raga Sudha hall, excitedly saying ‘while the recital is being webcast, this is a live eoncert to which rasikas are invited.” (second photo)

Every 1st of a month, leading sabhas advertise their monthly concerts / events. On Feb.1, Narada Gana Sabha in Alwarpet made public a few events for the month.

And more concerts are scheduled at Raga Sudha Hall, Luz.

And Bhavan’s head, K N Ramaswamy says he is curating a music fest for early summer featuring young artistes who have made a mark because these artistes did not get the stage in December.

2 Comments on “Music, dance concerts begin to open up to rasikas now after shutdown year”