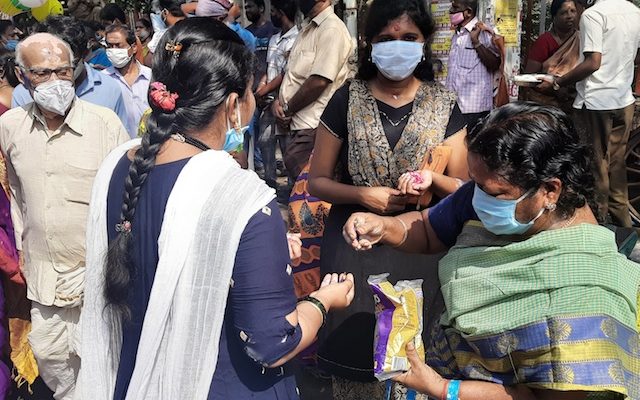 The highlight of the third morning of the Panguni utsavam when Sri Kapaleeswarar comes out on the Adhikara Nandhi vahanam was the enactment of the famous Saivite saint poet Thiru Gnana Sambandar’s gnana paal episode on the south side of the temple tank.

Today witnessed the biggest crowd at the temple in the last two years with several thousands thronging the Mada Streets early on Sunday morning. Having started the procession at 6 am, it took over three hours for the Lord to make it mid-way into South Mada Street.

By 8 am the gnana paal mandapam was decorated with a beautiful pulli kolam and the Shiva adiyars had begun presenting the verses of Thiru Gnana Sambandhar while sitting in front of the mandapam. While the devotees continued to have darshan of Sri Kapaleeswarar at the junction of East and South Mada street, a section of the devotees moved into the west half of the South Mada Street to get a vantage position ahead of the ‘Gnana Paal’ Utsavam.

Shortly after 9 am, to the loud beating of the drums, Thiru Gnana Sambandhar made his way from the temple to the South Mada Street along with Poopavai. Even as Sambandar reached the South Mada Street, Sri Kapaleeswarar on the Adhikara Nandhi stayed back allowing Karpagambal to pass by ahead of him for the enactment of the ‘Gnana Paal’ episode.

When Sambandar was three years old, he went to the sacred temple tank at Sirkazhi. When his father went into the tank for a bath, the child, missing his parents, gave out a loud devotional shout. Pleased with his call, Lord Shiva directed Parvathi to feed him milk. It was when his father enquired about the drops of milk on his lips that Sambandar pointed to the sky and rendered verses in praise of the Lord.

A delighted Lord then presented him with golden cymbals. When it did not produce sound, Sambandar presented songs in front of Ambal who then blessed him by providing sound/music to his songs at the Osai Nayaki Thalapureeswarar temple in Sirkazhi.

For many years now, a resident of Mandaveli has been distributing several packets of chocolates to devotees at this event, in celebration of her son, who did not speak till the age of five, having regained his voice after she presented ‘gnana paal’ over a decade ago on this third day of the Brahmotsavam on the South Mada Street. The boy is now a student of Class XI at P. S. High School. 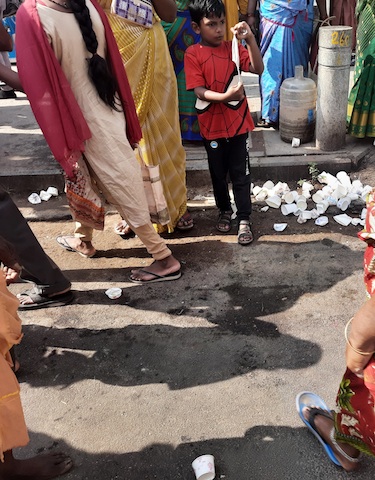 Tailpiece: A sad development on this Sunday morning was that of devotees throwing milk cups all over the South Mada Street side. While the authorities have banned distribution of food items on the days of the ther and Arubathumoovar, this careless conduct of the devotees should serve as an alert to the authorities for the rest of the Utsavam.

– Report and photos by S. Prabhu