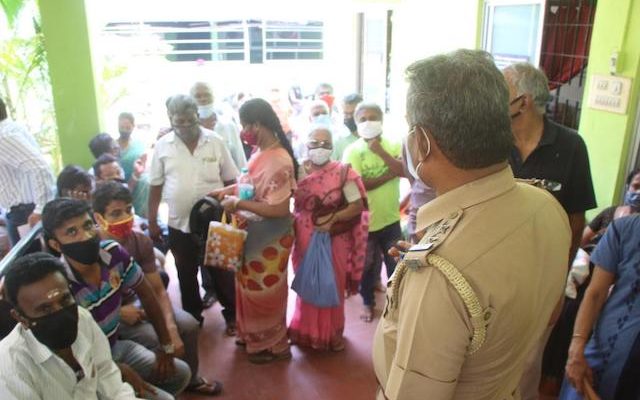 People at three vaccine centres in and around Mylapore faced a big delay in supply of vaccines. The supply was delayed at all the places we visited and this agitated people who had queued up.

9;45 a.m. We are at the GCC run clinic in Alwarpet. Some 100 plus have queued up for an hour, some say. But when the jab work did not begin at 10 a.m., some people led by a senior started to protest. Some said they had picked up tokens before 7 a.m. The protestors spilled on to the road.

There was a power cut and so the medical centre was in darkness. Police arrived to speak to the crowd and get some order.

At about 10 a.m. the vaccines arrived, both kinds and quickly, the jab process began. They had a supply of 100 doses of Covaxin and 200 doses of Covishield. A staff here said that the centre did not have a power back-up.

“Most of the people who had come for the jab went back home since the stocks were not here and then came running on the arrival of the vaccine,” said a nurse there. There were about 150 people and they all surrounded the nurse who was manning the registration desk – there was some chaos.

The nurse said she found it very difficult to manage the crowd and ended up having a severe headache.

12:30 p.m.
We stopped at Aashraya Andhra Mahila Sabha, Rosary Church Road, San Thome which also provides the jab. Staff here said that they had not got the day’s supply of vaccine. People who came to get the jab ware sent back home. A doctor here said they had sent their staff to collect vaccines and that would reach in 15 minutes.

“This delay is happening just today,” said the doctor who wanted to remain unnamed.