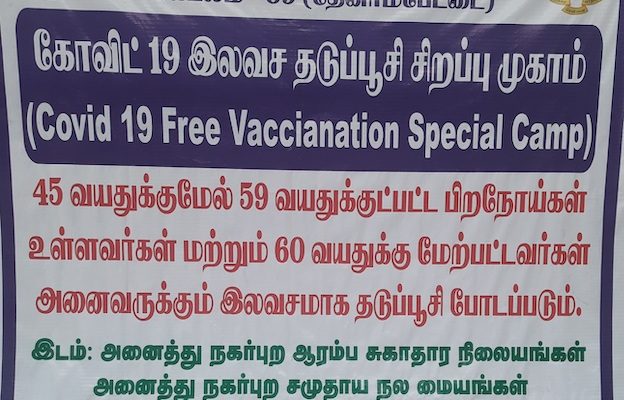 One month ago, the GCC-run Vaccination Centre on C P Ramaswamy Road had presented
a relaxed picture at the time of the first jab. People could go anytime in the day between 9am and 3pm and the first shot was almost instant without a wait.
However, this second fortnight of April, things have changed drastically. Almost every morning in the last few days have been tense, with people queuing up only to get answers that they do not want to hear – stocks had run out or tokens had been done for the day.
As she did 28 days ago, 70-year old S. Vathsala, a resident of Abiramapuram, went on Sunday morning at 10.30am with her husband only to be told that there was no stock left and was asked to come back on Monday morning.
When she went back a second time on Monday at 930am, she was told at the gate that vaccines for only 100 could be injected and that 100 tokens had already been given out to people that morning.
“We were asked to come on Tuesday at 7am to secure the token early. My husband went there at 7.30am to get the token at the entrance near the gate while I went there a little later carrying idlis for him, for he had not had breakfast. Even by 7.30am, the token number had touched 32..There were many who continued to wait standing in the hot sun while some of them who collected the token went back to return later. We decided to sit there.”
“The doctor came after 9am and the jabs started at 9.30am. They sent us inside the hall in batches of 10, made an entry based on our Aadhar card and sent us to the Vax room. Our turn came at 10.30am. We had been there for 3 hours.”
Active staff
“Till the time the handing of the tokens was done with which was around 8.30am, the service personnel at the centre made continuous announcements on the loudspeaker asking us to sit in our chair, to be in a queue to collect the token, to maintain social distancing, to have food before the injection. Communication was continuous over the one hour from 7.30am.”
“There were four of them managing the crowd outside and they did a great job in communicating continuously to all those present there. Inside the hall, Radhakrishnan directed each of us on the processes to be followed. He also gave us tablets to take in case we experienced pain after the jab.”
“Even though we were at the centre for three long hours, we were quite happy with the way they managed the process, especially given that people were continuing to come in after 9.30am and there was a big rush.”
Guidelines for those wanting to take a Jab
7am – 830am – Tokens are handed out ( number of tokens depends on the number of doses likely to arrive that day). B iut there is no firm information on number of tokens that will be granted.
9.30am onwards – Registration and Jab
Those who have secured the token after 7am may return home, have food and come back at/after 9.30am based on their token number
Those who come after 8.30am are unlikely to get the token as the experience in the last few days indicate that tokens run out by that time
Photo here is of banner at the entrance of the CPR Road Centre.
– Report by S. Prabhu