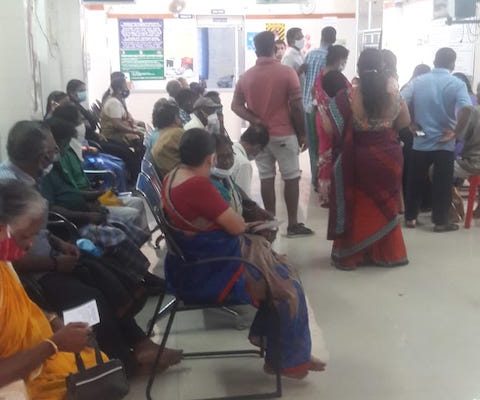 Today I went reluctantly for my jab. I went to the GCC clinic on Appu Street based on the advice a neighbour.

I went at 8 am and some 50 people stood waiting for the gates to open. They had got their tokens. I got mine as well. Gates opened by 8.45 am and only the first 50 were allowed, the staff saying there were only 50 vials of the vaccine. The rest were asked to wait or have their breakfast and come back.

I returned after 20 mins and found a bigger crowd and the token system was not followed. On asking ,I was told that only Covisheild vaccines would arrive at 10.30 or 11 am and I can wait or come back.

Fearing missing my jab , I stayed back awaiting my number. People started gathering. There were those who asked for their second jab of COVAXIN, which the staff initially said was absolutely unavailable today and they were to come back tomorrow to find out if it was available. Many Covaxin second jab people left hearing this.

The crowd was getting bigger eating away all distancing measures, people were told that Covaxin was likely to arrive and so only those awaiting  for dose 2 will be given it. So some who came later waited. A lady walked in with the vaccine box, people just crowded around this woman who was extremely patient giving info, writing people’s details etc.

The vaccination with Covaxin started with a serpentine queue of people standing close together. No  protocols were followed. No one complained as space was limuted.

When COVISHEILD arrived at around 11.20 am, the people surged forward to be vaccinated.
The queue of people awaiting the Covaxin jab got disturbed and there was chaos. Some people acted as volunteers; they got up from the crowd to help manage the crowd.

Covaxin people were separated into their lines and Covishield people were called by name to get their jabs in separate places. Order was tossed up.

I found most people had  been  given given after vaccination, which contains date of first jab and next due date. I did not receive it. I just have the roughly scribbled chit, from a small notepad, as my proof.

1. Space is extremely small for the enormity of crowd in the area.
2. Chairs can be provided for the people so they can wait outside for their numbers. A set of 40-50 can first receive their jabs and then next 50 can come in.
3. Staff though extremely patient, did work well. But some step-in persons (volunteers) or additional staff can be appointed.
4. This waiting period can be removed by computerising the communication, like visual display of token numbers.
5. Staff to ensure people get their documents before they leave.
6. Volunteers to keep stock of new and second recipients.