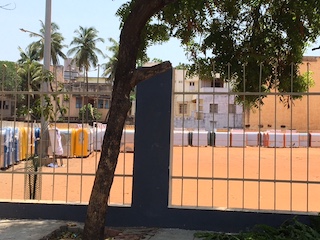 Tens of dozens of prefabricated hawker stalls which were meant for use on the Marina in a new plan that was debated and planned before the current wave of the pandemic set in have been parked in the open in the GCC playground off South Canal Bank Road, popularly called Alphonso ground.

Some 25 of them were stored in the sands off the Marina service road behind the Light House when the lot was brought here but they have remained unopened since then.

The hawker stalls were made by a private party who bagged a tender from the Chennai Corpotration which launched a plan to have uniform smart stalls be given to select hawkers who ply their business on the Marina.

The selection issue was mired in claims and counters and when the first lot of stalls were parked, people who reside in Nochikuppam staged a protest.