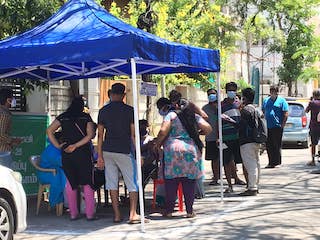 The city’s civic body has brought vaccine camps to the neighbourhoods now.

Since this morning, small teams of medical staff were seen sitting under make-shift tents and offering the jab and as word went arounds, a goodly number of people took the jab.

One such camp was seen in Mandaveli 1st Trust Link Street and another on Kutchery Road, at the Arundale Street junction. They are set up b y 9.30 am and close after noon.

Staff said later that a camp’s location is decided only late at night but it remains in nthe zione where each team is operating. People though will only get to know of the camp by word of mouth; it is not clear if GCC publicises the camp locally once it is set by the street corner.

Many people said that this move was welcome. People who take the jab though cannot be under observation in this set-up and will have to take care of themselves.