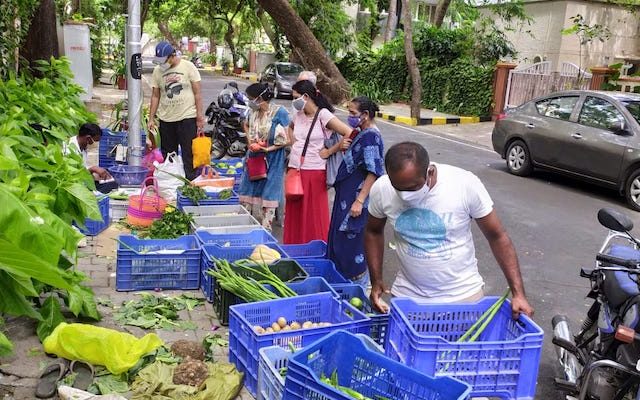 When a vegetables market, a sandhai was held in one of the streets of R. K. Nagar in R. A. Puram and one other in the same zone, two Sundays ago, local residents enjoyed the shopping experience. And many went home happy they could buy fresh vegetables and fruits.

The sandhai was an idea that two local residents’ associations had executed. One was led by TAKSRA and the other by RAPRA.

The lead members of the associations had made contact with the Tamil Nadu Horticulture Department to arrange for the transport and sale of vegetables and fruits locally.

“The sandhai idea was easy to execute on our street because it made shopping easy too,” says K. L. Bala Subramaniam of the association here.

The Horticulture Department had earlier launched its online and offline sales across the city to serve people at pandemic time when many regulations were in force and shopping was severely limited.

On one weekend, the R. K. Nagar group worked differently. Says Bala, “Many senior citizens said they would love to have vegetables delivered home. So we decided to take the orders from all of them and deliver the packs.”

Bala and his team also spoke to the active residents’ association in R. A. Puram called RAPRA ( Raja Annamalai Puram Residents Association) to spread the sales of the vegetables to make it viable for the Horticulture Department staff to hold such an operation.

Says Bala, “The more the orders the better it was for the logistics and for the sales.”

Now, people want this new initiative to be made into a regular affair and Bala and his team are working out the modalities to make it run smoothly.