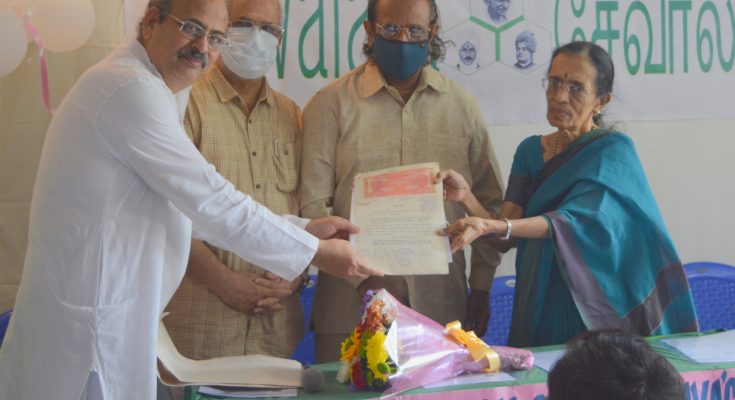 Lakshmi Venkatraman did not bat her eyelids when. she took the decision to donate to a voluntary organisation, an apartment she owned in Alwarpet that would have fetched her at least Rs.2 crores,

It some ways, this was a Christmastime gift for Sevalaya, a NGO which has, for over three decades, been developing educational and social services on a big scale in the districts of Thiruvallur and Kanchipuram.

“It was time to move on,” says Lakshmi, who has been a senior writer on art, music and culture and who ran an art gallery called ‘Sri Parvati’ ( which was also the name of this bungalow) on Eldams Road which was sold recently and is making way now to multi-storeyed building.

“I have known and observed Sevalaya’s activities for a decade and found it deserving to receive the property,” says Lakshmi who now resides in Royapettah and edits an online magazine called Lak Square ( www.laksquare.com)

The NGO had been looking out for space in the city to house its administrative operations and the donation came in handy – Sevalaya’s team now operates from this apartment.

Lakshmi’s charitable act perhaps flows from similar ones that her family has made since the 19th century.

Her roots trace back to an illustrious person – her grandfather was the famed judge of the Madras High Court, Justice P. R. Sundaram Iyer. This family owned and resided in the sprawling bungalow called Sri Baugh which stands near Nageswarar Rao Park in Luz.  In the 1930, it changed hands and was sold to the family of Nageswara Rao who started the Amrutanjan balm business.

Lakshmi’s family moved to Eldams Road, settling down in another vast property where Lakshmi’s father built the art deco house in 1935 which was pulled down recently.

A freelance writer, Lakshmi has been close to the city’s artists, the famous and the young, written on them, on their works and on their careers, curated art shows and closely followed India’s art world.

Now, her online magazine keeps her a bit busy. But she is considering shifting to Alwarpet or R. A.Puram if she locates a good apartment in a quiet colony that she can buy. ” I grew up and have spent decades in this area and I want to get back to it,” she says.

One Comment on “Writer on art, Lakshmi Venkataraman has donated her Alwarpet apartment to a NGO”