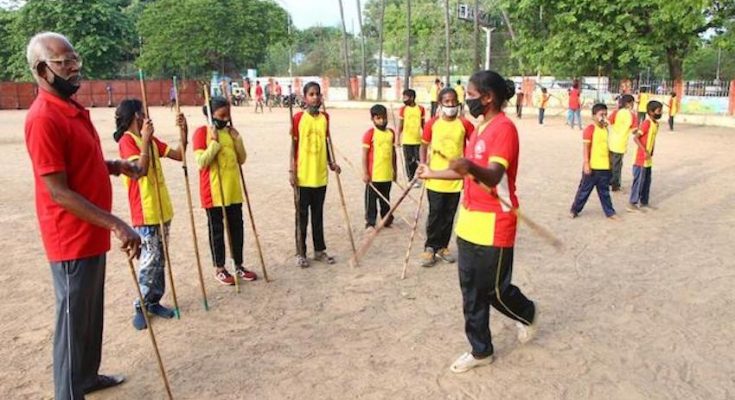 Silambam masters Jagadeesan and his elder brother Adhikesavan have a problem on their hands.  They have just lost the open space where they used to train over 50 children in this traditional sport.

For sometime now, these two masters freely trained and coached the children of the south R. A. Puram neighbourhood at the Chennai Corporation playground at the far end of Brodies Road, opposite the Jesus Calls office.

Last weekend, this space was closed to all – Chennai Metro is boarding up most parts of this large playground to start work on another phase of its underground rail project that runs from Madhavaram to Sholinganallur.

“This place was so convenient for us but now we don’t know where we can train. The kids are disappointed too,” said Jagadeesan when we met him on what was the last evening of coaching at the ground.

The brothers have been coaching in silambam free to anybody who wishes to learn this skill. The kids are asked to pay for their formal sports gear and sticks and also for travel when some of them are chosen to take part in silambam competitions.

“To meet the rest of the expenses we have paid from our pockets,” says Jagadeesan.