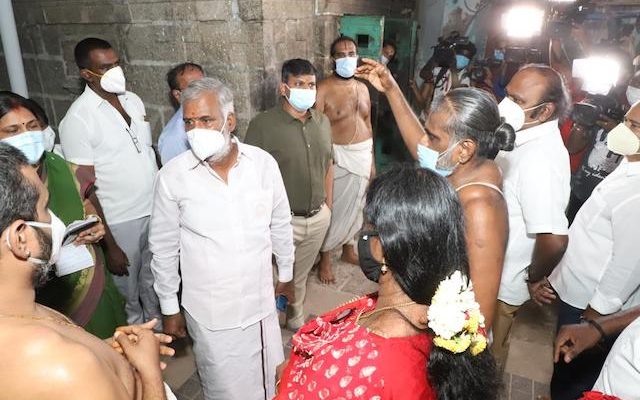 On Friday, the HR & CE sent a suspension notice to trustee NC Sridhar of Sri Aadhi Kesava Perumal
and pasted a notice on the temple gate announcing the takeover of the temple by the state. A replacement trustee was also appointed.
Mylapore Times had featured a story on Saturday morning on this news with the views of the trustee and temple activist TR Ramesh (https://www.mylaporetimes.com/2021/08/govt-plans-to-take-over-sri-adhi-kesava-perumal-temple-trustee-to-go-to-court/)
Late Saturday evening, the minister and top administrators of the department walked into the temple and looked all around, chatted with the staff and priests. Mylapore MLA was around too.
In an exclusive chat late on Saturday night, minister P K Sekar Babu told the Mylapore Times that there had been a file sent by the HR & CE department to the government in 2018 alleging illegal sale of the temple lands by the trustee. While no action had been taken in the last couple of years, he said he received the file and has taken action based on the file notes.
He also said that he will be investigating  on Monday the specifics relating to the lands illegally transferred which he indicated ran into several acres.
When Sekar Babu visited the temple on Saturday evening, he asked the priests to carry on with the poojas
as per the directions of the new trustee.
– Report by S. Prabhu