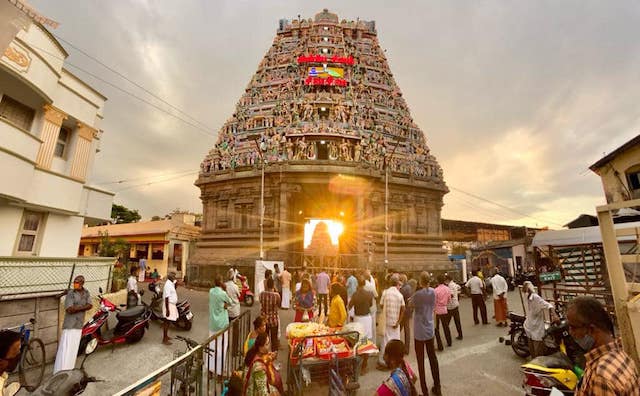 On August 5 evening, Thamizh Archanai services were formally launched at Sri Kapaleeswarar Temple
A big sign board was installed outside the Swami sannidhi with the phone numbers of
three hereditary Shivachariarars as a reference point for devotees.
E Venkatasubramaniam Shivachariar told Mylapore Times that the archakas have been performing archanai in Thamizh since 1971.  ‘We have been performing archanai for those devotees who specifically request for archanai in Thamizh for the last 50 years. Hence, specifically with reference to this temple, theThamizh archanai service is not new.”
With the announcement of the lockdown in March 2020, all archanai services had been stopped at the Kapaleeswarar Temple.
For the first time in over 15months, archanai services began on Thursday evening. Very soon, archanai ticket will start to be issued to the people, we learn.
The priest said that the phone numbers are only a reference point. Once the archanai is allowed formally through issue of archanai ticket, any devotee can perform archanai as earlier. “Those who specifically want archanai to be performed in Thamizh can ask for it and we will perform the archanai in Thamizh.”
Balaji gurukal, another hereditary Shivachariarar, said that all the archakas at the temple can perform archanai in Thamizh and that the  phone numbers given in the sign board are only a reference point. “Those priests who are in the respective sannidhis can themselves perform the archanai in Thamizh and that this is not restricted only to the three of the hereditary Shivachariars.”
Venkatasubramaniam Shivachariar clarified that devotees cannot give gothram and nakshatram details over phone and get the archanai done.  “That is not the process followed at this temple. Those who want archanai to be performed have to physically come to the temple to get the archanai done. There is also no pre- appointment required for performing the archanai and that it will be done at all times during the
temple hours.”
Balaji gurukal said that the archanai prayers in Thamizh are from the writings of Nayanmars – Thirunavukarasar, Manickavaachakar.
– Report by S. Prabhu